Home / Casino / Hainan would be no threat to Macau Beijing is reportedly mulling opening another gambling jurisdiction in Hainan. Will they, won’t they, and if they do what will happen? First of all, the question is mostly irrelevant for the near term because by the time it happens, we’ll be in a different world. Even if tomorrow Beijing decided to start auctioning off Hainan licenses to casino firms, it would take at least 5 years for anything to really get off the ground. The financial world is moving so fast now that 5 years is an eternity.

Consider, 5 years ago was before the 2014 Macau crash, an event that has shaped the financial landscape of the province ever since. Before another 5 years passes you could have another one, and then we can discuss how an active Hainan gambling province might impact Macau at whatever level it’s at in 5 years.

Longer term though, the first thing to say is that competition is a good thing for all involved, so while losing a monopoly on a territory may sound scary for the beneficiaries of that monopoly, ultimately monopolies poison companies and make them lazy, inefficient, and eventually bankrupt. For the most recent example, look at the Puerto Rico Electric Power Authority (PREPA). It’s hard to think of a more inept company with a monopoly over an entire service in a given territory. After failing to get the lights on in Puerto Rico nearly 5 months after Hurricane Maria, the firm is finally being privatized. The modern story of bankrupt monopolies goes all the way back to the British East India Company, which caused some serious famines in Bengal, India before it went bankrupt in the 19th century.

Competition for Macau already exists though in any case. It’s just that this competition is from other countries, so like it or not Macau does have to compete. The question for Beijing is whether Macau will compete against a jurisdiction where Beijing also has taxing authority, or will it compete against a foreign one? Some argue that Beijing will not allow gambling in Hainan because gambling goes against the ideology of communism. This is a silly argument. There is no communist ideology. There is just the drive for wealth, which can either be satisfied through liberty and free markets, which tends to benefit everyone, or through top-down central planning, which tends to benefit cronies and the politically connected at the expense of everyone else. In almost all countries there is a mix of both, in different degrees. No politician runs an economy according to ideology. They run it according to what will get them the most money and votes.

If Beijing thinks it can increase its tax revenues by opening up gambling in another Chinese province rather than lose that revenue to Vietnam or Cambodia or Australia, then it will do so, eventually. Beijing does not care about Macau’s revenue. It cares about its own.

Last month, the numbers of tourists to Macau from Japan, France, Taiwan, Hong Kong, the US, UK, and Canada all fell. That’s tax revenue lost to Beijing. Maybe these tourists been to Macau before and want to try something new. Opening up another gambling province would help boost those numbers.

What about the vested interests in Macau that would fight against opening up Hainan? Who says they would? Why can’t these vested interests themselves bid for licenses in Hainan, maybe set up a few bribes to get them or shut others out, as always happens? I don’t see why the same connected companies that already operate in Macau wouldn’t want to expand to Hainan. It’s not like Macau is a single company with its own independent interests, working together. The gaming industry there consists of many different firms obviously, each of which could benefit from more business in Hainan.

The mainstream narrative being cooked up is that rumors of opening up another gambling province in Hainan is what caused Macau stocks to fall. Macau stocks began to fall anyway along with every other stock market in the world for no apparent reason. This is a case of the media connecting an event with price action for the sake of weaving a narrative that sells a story. I doubt that any rumors of a new Chinese gambling province at least 5 years down the road have anything whatsoever to do with recent Macau price action. All it may have done was give an excuse for those looking to exit, to do so anyway.

There is a much more predictable way to gauge Macau stocks. Take a look at these two charts. The first is the Macanese Pataca supply from January 1, 2010, until the present. The second is the BJK gaming ETF, which is mostly Macau stocks, over the same time period. 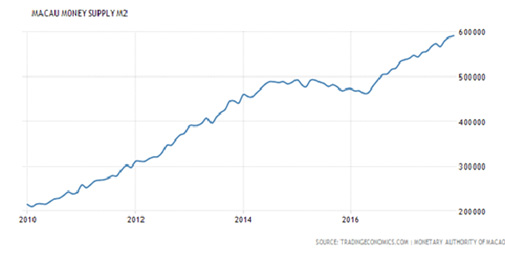 Those who followed the Macau money supply would have been out of Macau stocks by May or June 2014 when it became clear that M2 was stagnating for a long period of time. While you wouldn’t have caught the exact top, you would have steered clear of much of the crash, or at least increased cash and lightened positions. The same leveling off of Macau M2 happened from late 2007 until late 2009. See below. Follow M2 and you would have started lightening Macau positions by early 2008, again missing much of the decline, though not all.

While I wouldn’t say that Macau is the best place to put money in right now, it looks safer than the US, which probably has months of decline ahead in equities.