Home / Press Releases / Gamevy pulls out its trump card: so much winning! 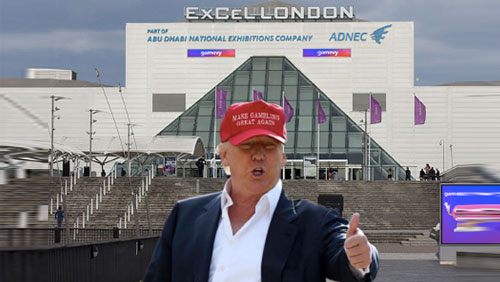 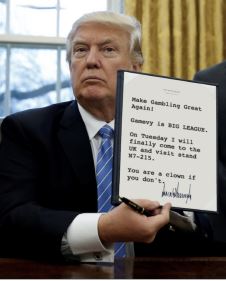 This year at ICE, the company who brought you studs in stilettoes and the Gamevy Grannies, are taking things to the next level…

Donald Trump is finally coming to the UK – not because of the Queen or Theresa May – but invited by Gamevy to make gambling great again.

“We called our good friend, Donald Trump,” says Paul Dolman-Darrall, Gamevy’s CEO. “And explained to him that there was a swamp of boring games that needed draining. We explained about the innovations we had planned – the maths, the new mechanics – and how our games make people winners! Because he’s a genius, he grasped it in zero time.”

Trump instantly tweeted his excitement – causing something of a twitter storm amongst those who wanted to deny the crowds of people swarming to ICE to greet the leader of the free spin world. 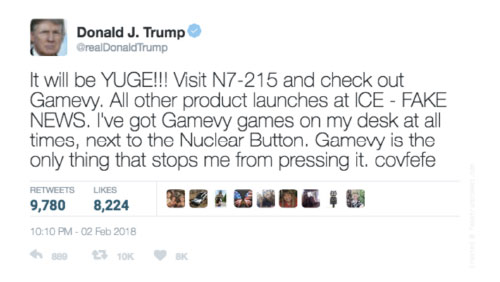 To celebrate the pause in launching rockets, Gamevy will be launching tremendous new games this ICE. Inspired by Trump, Gamevy’s amazing new games offer every player the chance to be a hero, to really start winning again and stop being weak! Show your skills in fighting, scoring goals and defeating evil. And – of course – Gamevy will be offering its signature jackpots – bigly!

Recently arrived at the Excel, Trump has announced how happy he is to be with his good friends at Gamevy. So come to see the games at N7-215 and start making gambling GREAT again.

About Gamevy: Gamevy puts the play into i-gaming with the most innovative games on the market, capturing the imagination of a new generation through its skill, strategy and interactive instant win games. With 25 people in London and Bilbao, the growing company has big ambitions, and are winning customers around the world. Read more or play the games at http://gamevy.com/#games