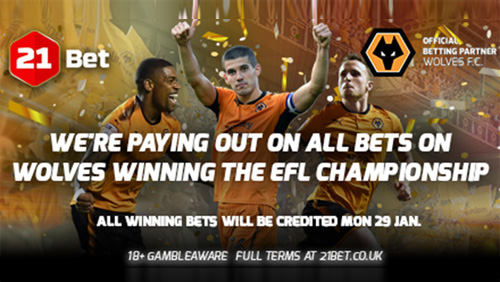 Official betting partner of Wolverhampton Wanderers 21Bet are rewarding fans and ante-post punters a nice boost as they are paying out on all bets on Wolves winning the EFL Championship.

At start of the Season Nuno Santos’ team were 12/1 to win the League and that price only shortened as Wolves got off to a flyer and built up a commanding lead at the top of the League.  Punters latched onto this and plenty of bets came in for them.

The chasing pack have tried, but none has been able to get close to the runaway leaders and we cannot see anyone stopping Wolves clinching the title.

Richard Hogg, CEO of 21Bet, explained the idea: “As partners of Wolves, it’s only right we be the first bookie to payout on them winning the EFL Championship and reward fans who backed their team at the start of the season. It will cost us into the Thousands, but we don’t mind”.