Maria Lampropulos closes the curtain of the 2018 PokerStars Caribbean Adventure by beating the 582-player field in the $10,300 Main Event to bank her second seven-figure score in the past ten months.

There is a hole in the tapestry of poker. It used to have the name of Vanessa Selbst woven into it. Poker got tough; Selbst couldn’t sell it, hence the hole. Who will fill it? Maria Lampropulos has a needle in her hand.

The line between luminous light and luck is as thin as lint, but those wit 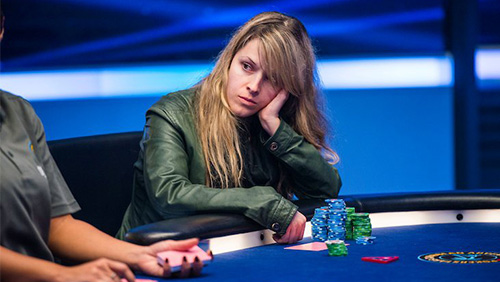 h a penchant for bathing in glory made it to the very end of this thing. No disrespect to Daniel Coupal, but after the Canadian hit the rail Lampropulos had to face three of the most celebrated poker players in the world. Had Gandalf the Grey been a poker player (Middle Earth banned him because of his magic) he would have called her a fool and told her to run. But he doesn’t exist. Fortunately, Shawn Buchanan simplified things by kissing a grenade and hurling it on the table.

Buchanan, one of the best tournament players in the world, eliminated the Global Poker Index (GPI) #1 Adrian Mateos in fourth, and then took an impressive chip lead into the final battle after eliminating the High Stakes phenom Koray Aldemir in third.

Buchanan led Lampropulos by 11.7m v 5.6m, and quickly extended that lead to 13.6m v 3.4m. And then came the comeback. The Argentine star doubled up twice in quick succession. Bish. Bosh. Buchanan’s balls bruised like two pieces of fruit left in a rucksack for days. From that point on, the deck turned it’s back on Bucky, and Lampropulos went on to finish the job.

It’s Time For a Wikipedia Change

It was the first time the PCA Main Event had awarded a seven-figure score since Kevin Schulz won in 2015, and remarkably it was Lampropulos’s second score of that magnitude in the past ten months. Last year, Lampropulos defeated 1,204 entrants to win the partypoker MILLIONS in Nottingham for $1,255,004.

Here’s the thing with poker. There is no master. Nobody is in charge. We make the rules up as we go along, and it’s time to do that again. Only time separates a partypoker MILLIONS event from a European Poker Tour (EPT), World Poker Tour (WPT) or World Series of Poker (WSOP) bracelet win. All the other ingredients are in the mixer.

Lampropulos has now won a MILLIONS event, and an EPT title (one assumes the PCA win falls under that umbrella after the PokerStars Championship took a fatal overdose). By my reckoning that makes her one claim shy of a Triple Crown, and one of the early favourites to win the Grand Slam.

All we need now is for a poker-loving pen pusher to rewrite the Triple Crown Wikipedia Page.

The Best Female Player in the World?

Yesterday, I published an interview with Liv Boeree suggesting the UK-pro could be the person to replace Vanessa Selbst as THE female star in poker. I still believe that, but Lampropulos is going to be a serious challenger.

Only eight female players have ever carried the label of the GPI Female #1. Boeree is on that list. Lampropulos currently sits #2 behind Kristen Bicknell. The PCA Main Event win earns the Argentine star 606.34 points, and by my reckoning, the next time Eric Danis weaves his statistical magic, she will become the ninth player to wear that crown. 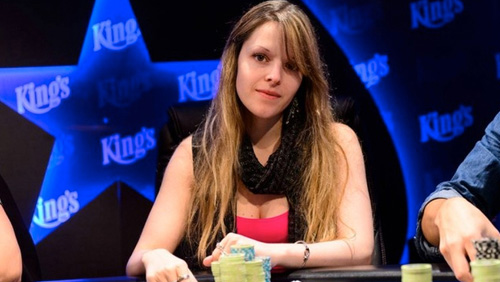 It was Lampropulos who ended Boeree’s PCA run, finding KK v QQ to eliminate the PokerStars Team Pro in 17th place, giving Lampropulos enough firepower to make it to the final table.

The striking similarity between the pair is their choice of companionship. Lampropulos is dating Ivan Luca, and the couple is 1 & 2 in the Argentina All-Time Money List on Hendon Mob. Boeree’s beau is Igor Kurganov #1 on the Russian leaderboard.

When most of us are debating how much money the tooth fairy is going to leave under the pillow and arguing over the price of organic apples, Boeree and Lampropulos are talking about poker with two of the games finest artisans.

Last year, Boeree and Kurganov won the $10,000 No-Limit Hold’em Tag Team Championships at the WSOP. In 2016, Luca and Lampropulos squared off in the heads-up phase of the 682-player field €1,100 NLHE Eureka Poker Tour Main Event in King’s Casino. Luca won.

It’s going to be a fascinating time to be a female in poker. Selbst remains the only female player ever to hold the GPI #1 spot, and we’ll miss her.

With Cate Hall struggling away from the tables, who gets to fill the hole in that tapestry remains a mystery for now. Boeree, Bicknell and Maria Ho are the obvious candidates. You can now add Lampropulos to that list.

The Best of the PCA Rest