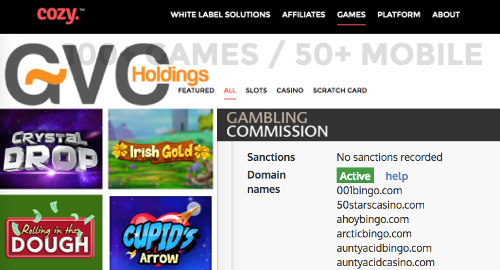 Earlier this month, some sharp-eyed bingo affiliates noted that the UK Gambling Commission had revised the licensing details of the Cozy Games family of online bingo sites. The sites are now listed under the licensing umbrella of GVC subsidiary ElectraWorks Limited, along with GVC’s flagship brands Bwin and PartyPoker.

Individual Cozy Games’ bingo sites have also updated their licensing information, indicating that they are operated by ElectraWorks in the UK but remain under the control of the Isle of Man Gambling Commission-licensed Cozy Games Management Limited in the rest of the world.

Despite the changes having been spotted a couple weeks ago, neither GVC nor Cozy Games has yet to publicly comment on the licensing switcheroo, so we don’t yet know what price GVC paid for the acquisition.

GVC CEO Kenneth Alexander has made no secret of his willingness to take the mergers & acquisition route to enlarge his already growing company. GVC’s successful absorption and turnaround of the struggling Bwin.party Digital Entertainment brands clearly left a good taste in Alexander’s mouth and made him hungry for more.

The lengths to which GVC is willing to go to engage in further transformative M&A activity was on full display earlier this month, when the company announced it was divesting itself of its lucrative yet decidedly black market Turkish-facing operations, which had been seen as an impediment to GVC’s pursuit of a tie-up with UK bookmaking giants Ladbrokes Coral Group.

But Ladbrokes Coral isn’t the only potential option in GVC’s M&A buffet. Last year, GVC’s name was bandied about as a potential suitor for Canada’s Amaya Gaming (since rebranded as The Stars Group), the parent company of PokerStars. Although nothing tangible resulted from this talk, recent comments by Stars Group CEO Rafi Ashkenazi suggest a Stars-GVC union could be back in play.

On his company’s Q3 earnings call, Ashkenazi said Stars Group was looking to raise up to $2.5b to engage in a little acquiring of its own, with the principal aim of boosting its nascent online sportsbook division. GVC’s Bwin brand is among the most recognizable sports betting brands around, a factor that was cited by GVC’s new Russian partners in the recent launch of the Bwin.ru domain.