The penis of Republican Congressman Joe Barton, a big supporter of the legalisation of online poker, is currently floating around the Internet prompting calls for his resignation. 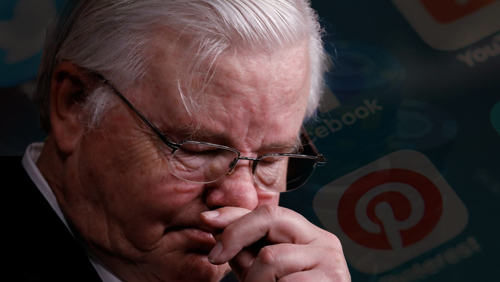 That’s a lot of sticky fingers.

And then something incredible happened.

A photo of a naked Barton snapping his trouser snake appeared on the Twitter account of Parker21333 along with a text that read, “I want u so bad. Right now. Deep and hard.” The anonymous tweeter copied President Donald Trump into the tweet.

The 68-year-old, voted into Congress in 1984, told the Texas Tribune that he took the photo when separated from his second wife during a time he had ‘sexual relationships with other mature adult women.’

Barton wed his second wife, Terri, in 2004. The pair divorced in 2015. His marriage to Janet Sue Winslow lasted from 1970 to 2003. Four children and five grandchildren are no doubt Googling this right now and staring at his bellend just because their brain is telling them not to.

Despite the leak, Barton is refusing to quit, but he did tell the Texas Tribune that he is reconsidering his re-election bid.

Don’t do it, Barton!

But if he is forced to retire, I sincerely hope he finishes his work on HR.2889 The Internet Penis Freedom Act.