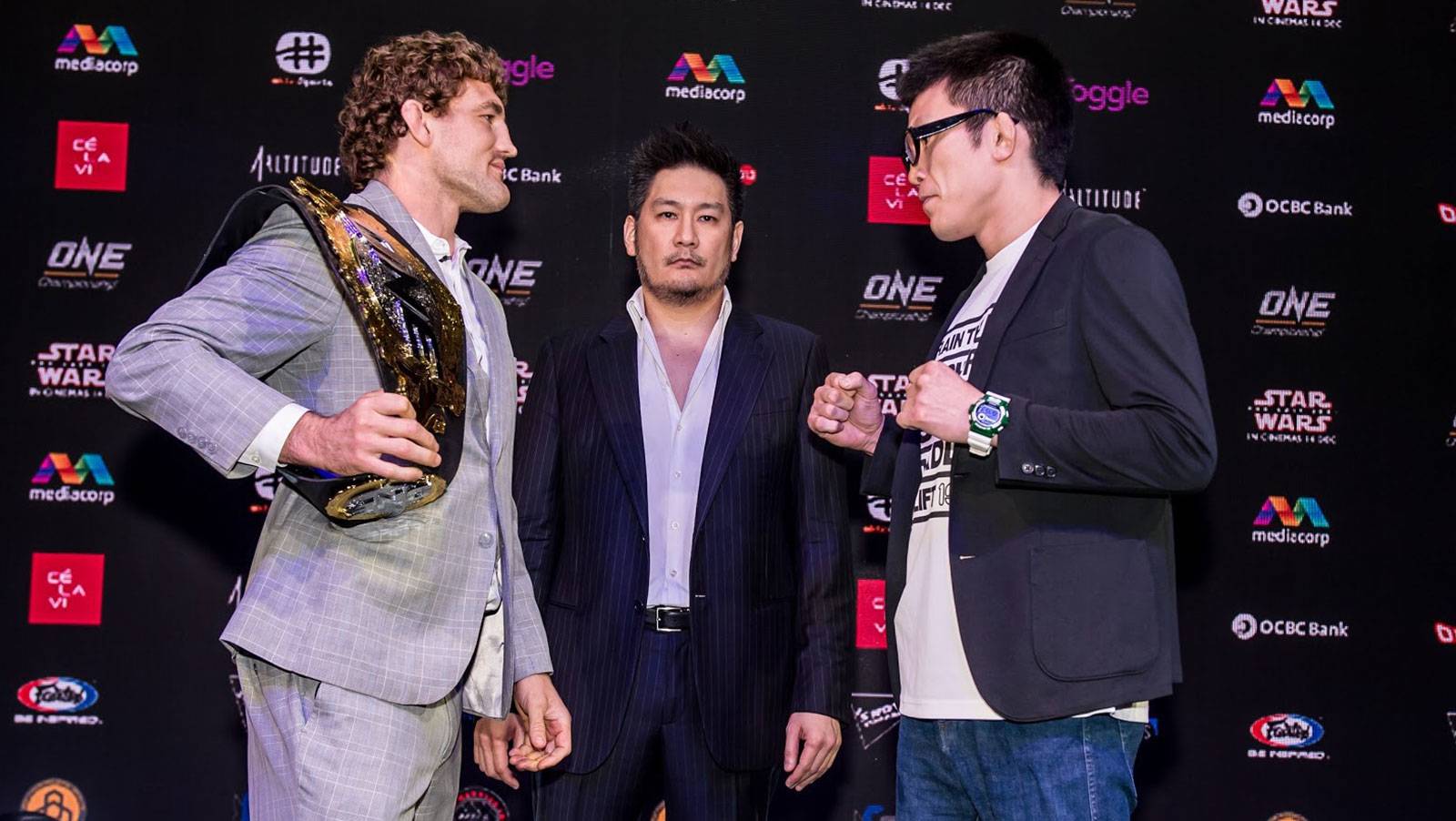 22 November 2017 – Singapore: The largest global sports media property in Asian history, ONE Championship™ (ONE), recently held the ONE: IMMORTAL PURSUIT Official Kick-Off Press Conference on 22 November at the Simpor Junior Ballroom of Marina Bay Sands in Singapore. In attendance was Chairman and CEO of ONE Championship, Chatri Sityodtong, as well as athletes Ben Askren, Shinya Aoki, Amir Khan, Adrian Pang, May Ooi and Vy Srey Khouch

This press conference was held ahead of all the action which takes place 24 November, at the Singapore Indoor Stadium, which features reigning ONE Welterweight World Champion Ben “Funky” Askren who will defend his title against former ONE Lightweight World Champion Shinya “Tobikan Judan” Aoki in the evening’s main event.

Photos of the ONE: IMMORTAL PURSUIT Official Kick-Off Press Conference can be downloaded here.

Chatri Sityodtong, Chairman and CEO of ONE Championship, stated: “Singapore is the place where it all started for ONE Championship. This country witnessed the growth of this great organization, from its humble beginnings to its rise as the largest global sports media property in Asian history. It’s great to be back home to host another blockbuster event. Ever since our first event, which was held in the heart of Singapore, ONE Championship has been relentless in its pursuit to give fans adrenaline-pumping action from start to finish. ONE: IMMORTAL PURSUIT is certainly an event not to be missed.”

Ben Askren, ONE Welterweight World Champion, stated: “I said from day one that I am the best in the world at what I do, and this is what I am going to do every single time. I have been saying that since I started my career, and I believe it more strongly than ever because I have proven it 17 times now, and I am pumped to prove it again on November 24th. Shinya is a really good opponent. Obviously, he is a legend of the sport, and he is a really big challenge on the ground, which is where I like to compete, personally. I am excited for this bout. He is a grappler and has a great skill set that I respect, so I think it will be a great battle.”

Shinya Aoki, former ONE Lightweight World Champion, stated: “Ben Askren is a spectacular martial artist. He is an athlete that I really respect. He has his own goal for his career, and I have mine as well. I am here to win another belt in ONE Championship and redeem myself in front of the world. I want to win again. I am not satisfied yet. I am very determined to win this next bout of mine. I never turn down a match. I am here to face the best.”

Amir Khan, ONE Athlete, stated: “I am a man on a mission. Adrian Pang is one of the top guys in the division right now, so it’s a big test for me. My current goal is to be a world champion in a big global promotion like ONE Championship. What I hope to do is inspire people to chase what they love. I want my martial arts career to be proof that if you have the passion for something, and if you’re good at it, you’ll be able to make a living out of it.”

Adrian Pang, ONE Athlete, stated: “It is like the young bull versus the old bull. It will be a tough match for me. He is young and he will have heaps of energy, and he’s strong. But I have never been knocked out in my career, so let’s see. I have competed all around the world, I have been up and I have been down. I know how to bring the action, and I’m bringing it Friday night.”

May Ooi, ONE Athlete, stated: “Competing in Singapore in front of all my family, friends and fans is such an honor. As a martial artist, I want to use the platform that I am standing on to inspire people. Life isn’t just about what you achieve, it’s also what you inspire others to achieve. While it is very important to work on your own personal development, there are many underlying intangibles within the realm of success that extend far beyond your individual success. I hope to be an inspiration to the people of Singapore. It has been a while since I competed here and I am excited to perform in front of my hometown crowd.”

Vy Srey Khouch, ONE Athlete, stated: “ONE Championship is the biggest promotion in Asia, and to be part of it, it’s truly an honor. Everything that I did in training is all worth it because I’ve made it here. I have prepared well for this bout, and I will make sure to showcase all of my skills. My opponent is extremely talented and experienced, so I will need to bring my best.”

A former NCAA Division I All-American and US Olympian, Ben “Funky” Askren is a collegiate wrestling legend and one of the finest martial artists in the world today. Askren joined ONE Championship in 2014, taking the promotion by storm and capturing the ONE Welterweight World Championship with a resounding technical knockout victory over Nobutatsu Suzuki. Since then, Askren has successfully defended the title twice, and has stopped six of his last seven opponents to maintain a perfect 17-0 professional record. In what is being billed as the last bout of Askren’s illustrious professional career, the American is set to defend his title against the legendary Shinya Aoki of Japan.

Global martial arts veteran Shinya “Tobikan Judan” Aoki of Shizuoka, Japan, is one of the world’s most decorated athletes. He is the DREAM Lightweight Champion, former Shooto Welterweight Champion, and the former ONE Lightweight World Champion. The 34-year-old Aoki is a Brazilian jiu-jitsu black belt under the famed Yuki Nakai and has won multiple grappling tournaments all over the world. Aoki also holds a black belt in judo and is widely considered one of the best pure grapplers in professional martial arts competition today. In his next bout, Aoki makes his ONE Championship welterweight debut, taking on reigning ONE Welterweight World Champion Ben Askren of the United States for the title.

23-year-old Singaporean top lightweight contender Amir Khan is a martial artist with a stellar professional record of 8-2. He is considered one of the most promising young talents to represent Singapore on the international stage of martial arts. Khan is currently riding a five-bout win streak, with all of his victories coming by way of scintillating finish, including one by submission and four by devastating knockout. In his most recent outing, Khan needed less than one round to finish Jaroslav Jartim with a combination of punches and kicks. Next in line for Khan is the always-dangerous Adrian Pang.

Adrian “The Hunter” Pang is a martial arts veteran from Queensland, Australia, with a 22-10-2 professional record. The veteran Pang has decimated opponents with his incredible power and no-frills approach to striking in nearly two decades as a professional. He is known for his astounding durability and overwhelming strength, with the ability to walk through opponents with little to no resistance. Pang will need to muster all of his strength however, when he takes on rising star Amir Khan of Singapore in his next appearance inside the ONE Championship cage.

Singaporean female strawweight contender “Mighty” May Ooi is a martial artist with a professional record of 3-2. A former champion swimmer, Ooi represented Singapore in the 1992 Summer Olympics held in Barcelona. Today, she is one of the country’s most talented martial artists, and a hard-working competitor possessing well-rounded striking and grappling skills. In her most recent contest, Ooi scored a thrilling upset, defeating Malaysia’s Ann “Athena” Osman by  first-round submission in her promotional debut. Ooi is now set to make her second appearance inside the ONE Championship cage opposite Cambodia’s Vy Srey Khouch.

Vy Srey Khouch is a highly-regarded Cambodian martial artist and former female boxer who competed in numerous international competitions. She made her professional debut in 2015, winning by decision at ONE: KINGDOM OF KHMER. In her most recent bout, Srey Khouch fell just short of victory against Malaysian icon Ann Osman at ONE: THRONE OF TIGERS. In her next bout, she will take on Singaporean women’s martial arts standout, May Ooi.

ONE Championship is the largest global sports media property in Asian history. Headquartered in Singapore, ONE Championship is the home of martial arts. The world’s most exciting martial arts organization hosts the largest sports entertainment events across Asia, featuring some of the world’s best martial artists and world champions, all signed to exclusive contracts, on the largest media broadcast in Asia. In addition to its digital platforms, ONE Championship broadcasts to over 1 billion potential viewers across 128+ countries around the world with some of the largest global broadcasters, including Fox Sports, ABS-CBN, Astro, ClaroSports, Bandsports, Startimes, Premier Sports, Thairath TV, Skynet, Mediacorp, OSN, and more.