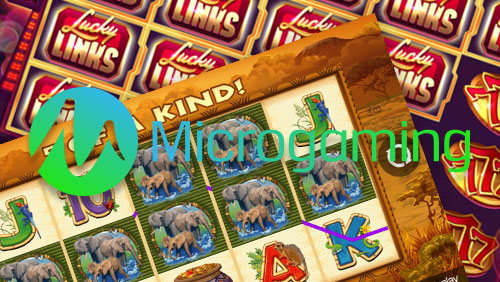 ISLE OF MAN – Microgaming releases two more games this November, in addition to its theatrical The Phantom of the Opera™ online slot.

Inspired by the beautiful plains of Africa, King Tusk has arrived to take players on a wild adventure in this five-reel, 25 payline online slot. This safari-themed game includes majestic elephants and exciting wild features, realised through stunning artwork to transport players on a thrilling expedition to big rewards!

The slot features a mystery wild in the base game which can be triggered randomly when the elephant within the King Tusk logo makes his call. During which, a herd of elephants will stampede onto the reels, turning a random symbol wild or a wild symbol into a vertical wild reel – unleashing the potential for gigantic wins!

Each spin in the Dance feature will add a wild onto the reels, with each wild sticking for five spins to increase the chances of winning big. During the Stampede feature elephants will charge across the game to randomly turn two reels wild, while the Gone Wild feature can turn all elephant symbols wild. All bonus features can retrigger 10 additional free spins to keep the adventure going!

With wins of up to 62,000.00 credits, players can stampede to huge rewards in King Tusk which launches to Microgaming and Quickfire operators on Wednesday 22 November. Watch the gameplay video here.

Lucky Links brings the bright lights and the exciting casino atmosphere to players in this five-reel, 20 payline online slot created by Just For The Win, exclusive to Microgaming and Quickfire.

Combining classical good luck charms with a sparkling light show brought to life by vibrant graphics, this striking slot will have players’ pulses racing in a game that pays both ways!

During the feature, the power bar pulsates to build anticipation, while the music and synchronized lights intensify, creating an exhilarating environment as players build up to big rewards!

“Player choice is at the heart of King Tusk, a graphically rich slot inspired by the majestic creatures that roam the African plains. This game has a wide range of free spins variations for players to choose from, each with its own unique take on wilds to bring players amazing new ways to win!

“Delivering a ‘win both ways’ experience, Lucky Links is a striking game created by Just For The Win, the studio who brought players Goldwyn’s™ Fairies earlier this year. The game brings the casino environment to players, combining captivating visuals with stacked symbols, Linking Reels and re-spins that will ensure players are entertained throughout.”

The game has arrived and the legend lives on: Microgaming’s Highlander online slot is live today
Press Releases
6 December 2017
.