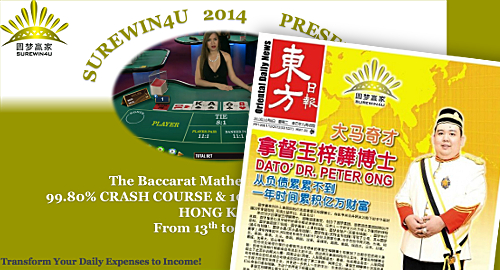 A group of Singapore investors are out millions after scammers convinced them they had a system for beating the casinos.

This weekend, the Straits Times reported that a High Court lawsuit had been concluded following a confidential agreement between the warring parties. Among the details revealed via the lawsuit were that a group of around 150 individuals may have been conned out of up to SGD50m (US $36.7m) by a shadowy group known as SureWin4U.

SureWin4U ran a website offering the opportunity to invest in various sized ‘packages’ based on the casino winnings of a group of so-called “expert gamblers.” The gamblers, whom the site claimed were from 21 different jurisdictions, boasted of a 99.8% success rate.

The lawsuit’s plaintiff, a 44-year-old diamond merchant named Lee Hwee Yeow, said he attended a ‘demonstration’ of the gamblers’ prowess at the Marina Bay Sands integrated resort in June 2013. Lee claimed he witnessed some other investors each give the gamblers SGD3k, and received returns of SGD300 within 45 minutes.

Lee said the investors also attended “extravagant dinners” at which two individuals, Mr. Wan Hoe Keet and Ms. Sally Ho, offered rags-to-riches tales of how their investments had paid off and urged would-be investors to buy packages in the scheme. The pair also offered assurances that investors’ money was “guaranteed” and “safe.”

Lee eventually purchased six “platinum” packages worth around SGD500k apiece, and initially he received small returns, along with regular updates via text messages regarding the high-flying lifestyle and casino exploits of SureWin4U’s CEO, a Malaysian national named Ong Kean Swan aka Peter Ong, the self-proclaimed ‘God of Baccarat.’

But in September 2014, the SureWin4U website went dark and Ong hasn’t been seen or heard from since. Lee’s lawsuit claims that by the end of January 2015, around 150 Singaporeans had filed police reports regarding their lost investments. Lee’s personal losses amounted to over SGD1.6m.

Unable to locate Ong, Lee filed his lawsuit against the site’s two promoters, Wan and Ho. However, the pair claimed that they too were Ong’s victims. Lee reportedly reached a confidential settlement with Wan and Ho that brings an end to Lee’s quest for justice, although it’s unknown if any of the other 150-odd investors are pursuing similar legal claims against the pair, or whether they’re simply too embarrassed at being taken for such rubes.