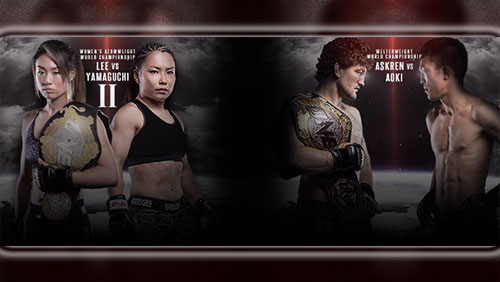 23 October 2017 – Singapore: The largest sports media property in Asian history, ONE Championship™ (ONE), has just announced the full card for ONE: IMMORTAL PURSUIT, set for 24 November at the Singapore Indoor Stadium. Fans will be treated to another exciting evening of authentic martial arts action, as the best martial artists in the world take to the ONE Championship cage. In the main event, reigning ONE Women’s Atomweight World Champion “Unstoppable” Angela Lee will defend her title against Japanese martial arts veteran Mei “V.V” Yamaguchi in a highly-anticipated rematch. In the evening’s co-main event, reigning ONE Welterweight World Champion Ben “Funky” Askren will defend his title against former ONE Lightweight World Champion Shinya “Tobikan Judan” Aoki. It is Askren’s final bout as a professional before he retires from the cage, and takes an executive position with ONE Championship.

Ticket information for ONE: IMMORTAL PURSUIT is available at www.onefc.com.

21-year-old “Unstoppable” Angela Lee of Singapore is considered one of ONE Championship’s most outstanding athletes. She captured the inaugural ONE Women’s Atomweight World Championship with an awe-inspiring victory over Mei Yamaguchi in 2016, and has since then defended the title successfully on two occasions. Lee’s beautiful combination of elite striking and grappling has proven to be a potent formula for success, as she has remained unbeaten in her career. In the most recent bout of an impressive run, Lee dominated top contender Istela Nunes, showcasing her wide array of skills. She now returns to Singapore to defend her title against Mei Yamaguchi in a much-anticipated rematch.

34-year old Japanese martial arts veteran Mei “V.V” Yamaguchi is a female atomweight standout and a former ONE world title challenger from Tokyo. She is the DEEP Jewels Featherweight Champion, and owns seven submissions and two knockouts in her 27-bout professional career. In 2016, Yamaguchi challenged Angela Lee for the inaugural ONE Women’s Atomweight World Championship in an epic showdown that would later win multiple ‘Bout of the Year’ honors from international media publications. In her last bout, Yamaguchi submitted top contender Jenny Huang impressively within two rounds. With the victory, Yamaguchi earned the right to challenge for the world title once more opposite the champion Angela Lee.

A former NCAA Division I All-American and US Olympian, Ben “Funky” Askren is a collegiate wres

tling legend and one of the finest martial artists in the world today. Askren joined ONE Championship in 2014, taking the promotion by storm and capturing the ONE Welterweight World Championship with a resounding technical knockout victory over Nobutatsu Suzuki. Since then, Askren has successfully defended the title twice, and has stopped six of his last seven opponents to maintain a perfect 17-0 professional record. In what is being billed as the last bout of Askren’s illustrious professional career, the American is set to defend his title against the legendary Shinya Aoki of Japan.

Global martial arts veteran Shinya “Tobikan Judan” Aoki of Shizuoka, Japan, is one of the world’s most decorated athletes. He is the DREAM Lightweight Champion, former Shooto Welterweight Champion, and the former ONE Lightweight World Champion. The 34-year-old Aoki is a Brazilian jiu-jitsu black belt under the famed Yuki Nakai and has won multiple grappling tournaments all over the world. Aoki also holds a black belt in judo and is widely considered one of the best pure grapplers in professional martial arts competition today. In his next bout, Aoki makes his ONE Championship welterweight debut, taking on reigning ONE Welterweight World Champion Ben Askren of the United States for the title.

Leandro “Brodinho” Issa is a 34-year-old Brazilian jiu-jitsu world champion black belt from Sao Paulo, Brazil, who trains and competes out of the world-renowned Evolve Fight Team in Singapore. With a record of 14 wins and six losses, including nine wins by submission and two by knockout, Issa has proven to be an exciting competitor with a penchant for spectacular victories. A pioneer of ONE Championship’s bantamweight division, Issa will take on American Andrew Leone in his next assignment.

Andrew Leone of Cortland, New York, is a 28-year-old martial artist who trains alongside some of the most talented combat sports athletes in Asia at the renowned Bali MMA gym in Indonesia. With a standout record of eight wins and only three losses, Leone is victorious in three of his last four outings, including tough decisions over top flyweight contenders. In his most recent contest, Leone earned the right to challenge reigning ONE Bantamweight World Champion Bibiano “The Flash” Fernandes, falling via first-round submission. Now, Leone is looking to get back into title contention but will next have to face talented veteran Leandro Issa.

22-year-old Singaporean top lightweight contender Amir Khan is a martial artist with a stellar professional record of 8-2. He is considered one of the most promising young talents to represent Singapore on the international stage of martial arts. Khan is currently riding a five-bout win streak, with all of his victories coming by way of scintillating finish, including one by submission and four by devastating knockout. In his most recent outing, Khan needed less than one round to finish Jaroslav Jartim with a combination of punches and kicks. Next in line for Khan is the always-dangerous Adrian Pang.

Adrian “The Hunter” Pang is a martial arts veteran from Queensland, Australia, with a 22-10-2 professional record. The veteran Pang has decimated opponents with his incredible power and no-frills approach to striking in nearly two decades as a professional. He is known for his astounding durability and overwhelming strength, with the ability to walk through opponents with little to no resistance. Pang will need to muster all of his strength however, when he takes on rising star Amir Khan of Singapore in his next appearance inside the ONE Championship cage.

22-year-old Li Kai Wen of Tianjin is the ONE Featherweight Beijing Tournament 2014 Champion and is one of the most fearsome young competitors from China. Li utilizes his tremendous striking ability and aggression to overwhelm foes with his offense, which has resulted in a series of impressive highlight reel stoppages so far in his young career. On his way to becoming a complete martial artist, Li will be faced with a tough challenge in fellow rising star Ahmed Mujtaba.

Ahmed “The Wolverine” Mujtaba is a Pakistani martial artist competing in ONE Championship’s stacked featherweight division. He owns an impressive professional record of six wins with only one defeat, with 83% of his wins coming by spectacular finish. Mujtaba is known for his tremendous grappling technique which has led to four submissions out of six total victories. Mujtaba makes his highly-anticipated return to the ONE Championship cage against Li Kai Wen.

Singaporean female strawweight contender “Mighty” May Ooi is a martial artist with a professional record of 3-2. A former champion swimmer, Ooi represented Singapore in the 1992 Summer Olympics held in Barcelona. Today, she is one of the country’s most talented martial artists, and a hard-working competitor possessing well-rounded striking and grappling skills. In her most recent contest, Ooi scored a thrilling upset, defeating Malaysia’s Ann “Athena” Osman by  first-round submission in her promotional debut. Ooi is now set to make her second appearance inside the ONE Championship cage opposite Cambodia’s Vy Srey Khouch.

Vy Srey Khouch is a highly-regarded Cambodian martial artist and former female boxer who competed in numerous international competitions. She made her professional debut in 2015, winning by decision at ONE: KINGDOM OF KHMER. In her most recent bout, Srey Khouch fell just short of victory against Malaysian icon Ann Osman at ONE: THRONE OF TIGERS. In her next bout, she will take on Singaporean women’s martial arts standout, May Ooi.

37-year-old Arnaud “The Game” LePont is a lightweight veteran from France who sports a professional record of 11 wins and five losses. A fixture in the Asian martial arts scene, LePont is well-known in local martial arts circles and lives and trains in Ho Chi Minh City, Vietnam. He made his promotional debut in 2012, and has since notched two hard-earned victories in the ONE Championship cage. He now returns to action after a short break to take on Richard Corminal.

Filipino lightweight competitor Richard “Lion Heart” Corminal is a Filipino martial artist based in Kuala Lumpur, Malaysia. He holds a professional record of four wins and two losses, with each of his career victories to date coming by way of knockout. In his most recent bout, Corminal debuted inside the ONE Championship cage opposite Thai martial arts star Shannon Wiratchai. Corminal now aims for redemption, as he takes on Arnaud LePont in his second appearance in the promotion.

Yang “The Pugilist” Fei of Hubei, China, is a newcomer to ONE Championship, and one of the most promising young Chinese martial arts talents in the game. He sports a professional record of two victories and only one defeat, with both of his wins coming by finish. Making his promotional debut, Yang will seek victory against Waqar Umar in a three-round preliminary bout.

27-year-old Waqar Umar of Pakistan is a ONE Championship featherweight with a 4-4 professional record. All four of his victories have come by submission, made possible by his well-established grappling skills. Inside the ONE Championship cage, he’s faced the likes of Peter Davis, Amir Khan, and Benedict Ang. In his most recent contest, Umar took on rising star Keanu Subba in Malaysia. Umar now returns to take on Chinese competitor Yang Fei.

Tiffany “Soul Crusher” Teo is a female martial artist who competes in ONE Championship’s women’s flyweight division. She holds an unblemished professional record of six wins and no losses, including two submissions and two knockouts. Born in Brunei and raised in Singapore, Teo began training in taekwondo before moving on to compete in boxing and Muay Thai and eventually transitioning to the ONE Championship cage. In her last bout, Teo impressed with a thorough decision victory over Rebecca Heintzman. Teo’s next assignment is against Pooja Tomar.

Flyweight competitor Pooja Tomar is a martial artist from India with a professional record of three wins and one loss. With a penchant for showcasing her solid striking skills, Tomar has recorded all three of her victories by knockout. Competing largely in her home country of India, Tomar now makes her way to the biggest stage in Asian martial arts as she is set to make her ONE Championship debut against top Singaporean talent Tiffany Teo.

Chinese bantamweight prospect Miao Li Tao and Cambodian Khun Khmer practitioner Sim Bunsrun are set to kick off all the action at ONE: IMMORTAL PURSUIT in the evening’s first bout offering. The two strikers will lock horns in an exciting three-round contest, setting the pace of what should be an amazing night of martial arts competition.

ONE Championship is the largest sports media property in Asian history. Headquartered in Singapore, ONE Championship is the home of martial arts. The world’s most exciting martial arts organization hosts the largest sports entertainment events across Asia, featuring some of the world’s best martial artists and world champions, all signed to exclusive contracts, on the largest media broadcast in Asia. In addition to its digital platforms, ONE Championship broadcasts to over 1 billion potential viewers across 128+ countries around the world with some of the largest global broadcasters, including Fox Sports, ABS-CBN, Astro, ClaroSports, Bandsports, Startimes, Premier Sports, Thairath TV, Skynet, Mediacorp, OSN, and more.