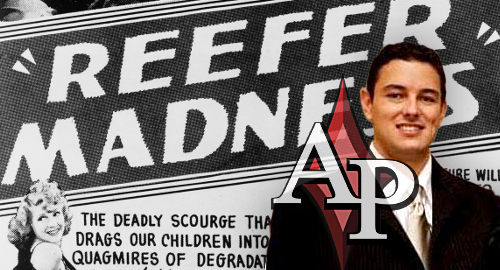 Absolute Poker (AP) co-founder Scott Tom and former US President Bill Clinton have at least one thing in common: neither one of them inhaled.

CalvinAyre.com has obtained the transcript of Tom’s September 28 sentencing hearing, which saw US Magistrate Judge Barbara C. Moses order Tom to spend a week in jail after he pled guilty to a single misdemeanor count of transmission of gambling information. (The full transcript can be read here.)

In case anyone needs a refresher, Tom and his step-brother Brent Beckley founded AP and its sister site Ultimate Bet, both of which went belly-up shortly after the April 15, 2011 Black Friday online poker indictments. Were it not for outside funds contributed by PokerStars’ former owners, AP’s customers would still be waiting to be reunited with their account balances.

One of the early items raised in the hearing by Tom’s attorney James Henderson was a correction to “one minor problem” in the pre-sentence investigation report that even Henderson admitted was “not of particular relevance to today’s proceeding.”

Henderson noted that the report’s claim that “five years ago Mr. Tom had smoked some marijuana or something.” This had led the Court to impose a drug testing regimen, with Tom being tested “10 or 12” times, all of which he passed with flying (yellow) colors.

Henderson said his client had informed him that the report’s pot-smoking claim was “incorrect information” and that Tom “has never used marijuana.” It’s worth noting that Tom was most likely not hooked up to a polygraph machine at the time he made this statement.

Tom’s insistence on asserting his lifelong ability to ‘just say no’ reflects recent attitudes at US border crossings, in which many an overzealous Barney Fife has questioned would-be tourists if they have ever – and we mean ever – smoked pot. Believe it or not, in today’s America, merely confirming that you once got hot-boxed in the back seat of a Chevette in junior high school can potentially bar one’s future entry into the country for five years.

TOM “REGRETS” RENOUNCING CITIZENSHIP
And Tom is considered a foreigner in US eyes, having renounced his US citizenship “many years ago,” although Henderson said that’s a decision that Tom now “regrets.” AP’s operations were largely based in Costa Rica, but Tom took up residence in Antigua – which lacks an extradition treaty with the US – after US authorities began actively targeting online gambling in 2006.

Henderson said Tom has been “trying to arrange to get back in the United States pursuant to visas in the future.” Tom still has family in the US, although his mother died during the period in which he was reluctant to set foot on US soil.

ABSOLUTE DISAGREEMENT WITH FATHER OVER BAIL MONEY
Tom’s father is still alive and was the source of the $100k that Tom was required to post at his bail hearing in February. The sentencing hearing revealed that there is sharp disagreement between Tom and his father regarding whose money this is.

Henderson told the court that Tom had inherited the $100k “from his grandmother” and that he’d given it to his father “to hold for him because he was obviously out of the country experiencing these legal difficulties.” Henderson said that Tom’s father “is now contending that that is his money.”

This poses a problem, because the release of this money was intended to provide a good chunk of the $300k that Tom was ordered to forfeit as part of his plea deal. Tom brought $25k to the hearing that he intended to pay toward this forfeiture.

Henderson said his office was working on resolving ownership of this $100k to ensure it didn’t go “back to the father and have that money disappear,” but Judge Moses took it upon herself to place the $100k into a trust account pending the resolution of the dispute.

LOCATION, LOCATION, LOCATION
As for the rest of the forfeiture amount, Moses left it up to the government to establish a payment schedule. How Tom will afford it was also addressed, with a mention of Tom’s Antigua-based business – a celebrity party boat recently profiled by Flushdraw’s Haley Hintze – that Henderson assured Moses had “survived the hurricane problem down there.”

Moses inquired about Tom’s former residence in Costa Rica as another potential source for raising the forfeiture funds. While the “fairly nice home” is currently generating rental income, Henderson claimed it “appears to be basically unmarketable” based on the fact that a home of equal value just down the street had been on the market “more than three years” without a single offer. Tom “just can’t make [his CR house] liquid at this point.”

In delivering Tom’s sentence – which included the surprise seven-day jail stint – Moses said his AP involvement “does indeed appear to be the only significant blemish on an otherwise law-abiding life” and that Tom had “demonstrated that you are capable of living a law-abiding life for a sustained period of time.”

But Moses emphasized that Tom “did commit a crime. That’s why you’re here. You pleaded guilty to a crime … It is a misdemeanor, to be sure, which has immigration and other consequences, but a misdemeanor is a crime. I cannot ignore that.”

Tom’s sole statement during the hearing is reprinted below in its entirety:

“Your Honor, I very much regret the choices I’ve made, and after years of isolation and time to think, I realize I needed to come and face the Court in the US to try and move forward with my life. I hope you can consider my apology, and I look forward to returning home to a productive life.”