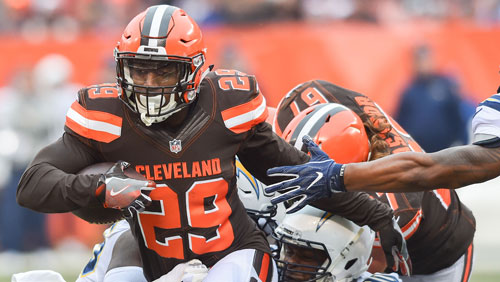 The winless Cleveland Browns (0-4) are well on their way to being the worst team in the NFL again this season, although this Sunday would seem to be their best opportunity to earn a victory because they are at home hosting the New York Jets (2-2) in a pick’em matchup.

Last Sunday, the Browns were routed at home by the previously winless Cincinnati Bengals 31-7 as 3-point home underdogs, and the week before that the Indianapolis Colts picked up their first win against them 31-28 as 1-point dogs.

Cleveland is hoping to get top overall pick Myles Garrett back versus New York so that he can put some pressure on quarterback Josh McCown. The public likes the Jets so far though, moving this game to a pick’em after the Browns had opened at -1.5. New York has won the past four meetings both straight up and against the spread.

Three other winless teams looking to pick up their first wins in Week 5 include the Los Angeles Chargers, New York Giants and San Francisco 49ers. The Giants are hosting the Chargers as 3.5-point home chalk, but they have lost the last three games between the teams SU and ATS.

Meanwhile, the 49ers are visiting the Colts as 1.5-point road dogs and like New York have also dropped the previous three head-to-head matchups.

Four games are off the board mid-week due to key injuries, but four others have point spreads of three points or less and should be competitive. They include the Dallas Cowboys (2-2) hosting the Green Bay Packers (3-1) as 1.5-point home favorites, the Buffalo Bills (3-1) visiting the Cincinnati Bengals (1-3) as 3-point road underdogs, the Detroit Lions (3-1) taking on the Carolina Panthers (3-1) as 3-point home chalk and the Seattle Seahawks (2-2) battling the Los Angeles Rams (3-1) as 1-point road dogs.

Based on line movement, it appears that sportsbooks will need the home teams to come through in most of those games with early action coming in on the visitors so far.

The Packers and Seahawks are two teams to watch closely as favorites to win the NFC with the defending conference champion Atlanta Falcons off on a bye week. Green Bay had opened +2.5 with Seattle at the same number before moving closer to a pick’em.