The Houston Texans (1-1) used a strong defensive performance and a huge touchdown run by rookie quarterback Deshaun Watson in his first NFL start to upset the Cincinnati Bengals last Thursday.

It will take a much bigger effort to pull off a similar feat this Sunday when the Texans visit the New England Patriots (1-1) as 13.5-point underdogs, looking to hand the defending Super Bowl champions their second straight home loss. 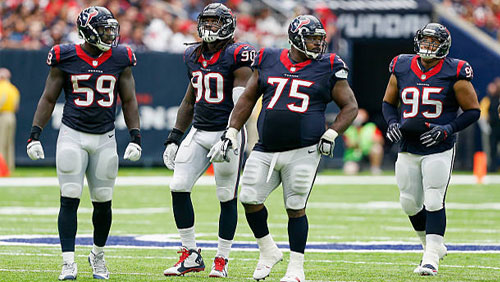 Houston has already lost the past six meetings with New England, so winning at Gillette Stadium seems almost impossible in this spot. However, the Texans could help sportsbooks simply by covering the spread as the biggest dogs on the Week 3 slate.

The Patriots have not lost two in a row at Gillette in nearly a decade (2008), and that happened when quarterback Tom Brady was out for the season with a torn ACL.

The Bengals (0-2) are another team books will likely need to cover on Sunday as they visit the Green Bay Packers (1-1) as 9-point road dogs. Cincinnati has been held without a touchdown through the first two games, and Green Bay’s defense played well against the Seattle Seahawks in the season opener at home before seeing Matt Ryan and the Atlanta Falcons win for the third consecutive time in the series on Sunday night.

The Falcons (2-0) could be a popular public play this Sunday after that impressive performance as well, attempting to improve to 3-0 versus NFC North teams when they visit the Detroit Lions (2-0) in a battle of unbeatens.

The jury is still out on the Lions despite their 24-10 win over the New York Giants on Monday night. Atlanta has covered the past four meetings and sits as a 3-point road favorite, although that number could go higher in favor of the defending NFC champs as the week progresses.

Maybe the most interesting matchup of Week 3 though has the Seattle Seahawks (1-1) visiting the Tennessee Titans (1-1) as 3-point road dogs. The Seahawks scored almost at will in the preseason, but they have not enjoyed nearly the same kind of offensive success so far in the regular season.

Meanwhile, the Titans bounced back nicely from a season-opening loss to the Oakland Raiders by routing the Jacksonville Jaguars on the road last week. The books will probably need Seattle to come through here.