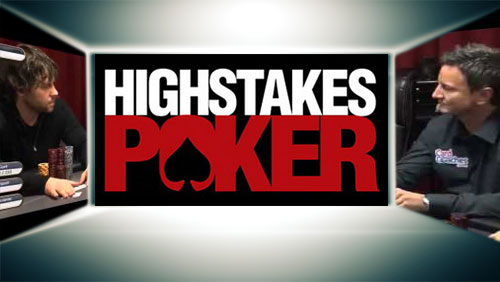 In the next 24-hours, someone is going to be handed a purple jacket and think, “What the fuck and I going to do with this?”

Poker Central’s Poker Masters has reached the End Boss part of the game, and four of the final six players hail from Germany. Poker has had a very Vorsprung Durch Technik feel about it for some years, and so I think it would be a fabulous idea to have a televised German High Roller cash game.

According to CardsChat.com the German High Roller cash game is currently airing on the German broadcast channel Sport1 and has been a permanent fixture on the German TV scene since 2009 (I am British. I live on an island. I only know British things).

The latest season consists of 16 episodes running from now until the end of November and contains luminaries such as the former PKR ambassador Vladimir Geshkenbein, the former World Series of Poker (WSOP) Player of the Year, George Danzer, and King’s Casino owner Leon Tsoukernik.

888Poker is sponsoring the latest season.

The world’s second largest online poker room is currently the sponsor of the WSOP, World Series of Poker Europe (WSOPE), and the Poker Masters. It also sponsored the Super High Roller Bowl and the Swedish Poker Championships this year.

Interestingly, in the past few weeks, partypoker have leveraged their relationship with Leon Tsoukernik to send online qualifiers to the WSOPE in the Czech Republic, and have also inked deals to sponsor the World Series of Poker Circuit (WSOPC) stops in Brazil and Uruguay.

Do we see a shift in sponsorship power?

Back to the German High Stakes cash game, and 888Poker is running online satellites that give one lucky player the opportunity to sit down in the game with €10,000 in free cash. Head to 888Poker for further details on that promotion.

888Poker Partner With Raising For Giving

Following in the footsteps of PokerStars – who last week promised to donate tournament fees (+$50k) of the $25,000 World Championships of Online Poker (WCOOP) High Roller to Raising for Effective Giving (REG) – 888Poker has done something similar.

During 888Poker’s XL Eclipse series, the team earmarked three events where they would donate tournament fees to the Against Malaria Foundation (AMF) via REG.

As part of that series, the $5,200 XL Eclipse Super High Roller attracted 87 entrants (+37 rebuys), and a Belarusian player known as spider44444 took down the $170,500 first prize. Thomas Muhloecker was fourth, and Mike Watson was eighth.

888Poker ambassador, Parker “Tonkaaaap” Talbot won the Tornado for $6,450 (fixed!). REG supporter Roman “Romeopro33” Romanovskiy won the High Roller for $107,500, and partypoker ambassador Joao “Ineedmassari” Simâo won a Mini Chip In event for $35,702.10, prompting many people (maybe just me) to believe he was a secret agent planted to run reconnaissance on their new rivals.