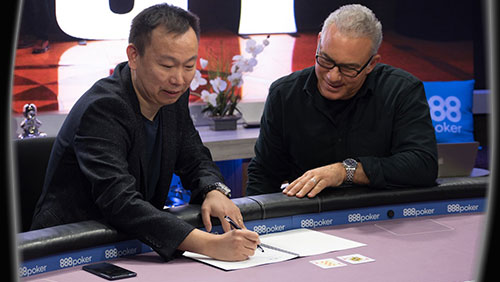 Poker Central has inked a deal with DOUPAI.TV allowing them to broadcast the World Series of Poker China Main Event final table, and Nick Schulman wins the opening game of the Poker Masters.

Poker Central has reached a multi-year agreement with China’s multi-media giants DOUPAI.TV that will see the 24-hour poker channel provide live broadcasting of the final table, and show highlight episodes of the World Series of Poker (WSOP) Main Event beginning in Q4 of each year.

Poker Central acquired the global TV and digital media rights for the WSOP action in the lead to the 48th annual event. It was the first time the WSOP Main Event was streamed live for the poker community from the first day of action. Poker Central’s subscription service PokerGO was the viewing portal.

With the WSOP in full swing, officials announced a ten year partnership with Tencent to take the WSOP brand to Asia for the first time. As part of that deal, WSOP China was born.

DOUPAI.TV won’t be alone in broadcasting the WSOP China action; their partners will also be privy to the action. DOUPAI.TV counts mainland China, Taiwan, Hong Kong, and Macau amongst their audience. The new deal means that WSOP coverage is now available in over 160 countries.

Nick Schulman Wins The Opening Event of the Poker Masters

Nick Schulman is in pole position to win the inaugural Poker Masters, but there’s a long way to go.

The rake-free stipulation of a punctual start saw 33 players set an alarm clock. By the end of registration, and re-entry period, the number of entrants had ballooned to 52. A huge number for an Aria $50,000 demonstrating the interest in the concept.

The final table contained more Germans than a car plant with Stefan Schillhabel, Steffen Sontheimer, Dominik Nitsche, and Koray Aldemir all making the cut. The other European at the final table was the Spanish beast, Adrian Mateos.

Daniel Negreanu stands to win over a million bucks if he can win the purple jacket. Kid Poker will be disappointed to have made the final table, only to exit in seventh place, but at least he has some points on the board.

Forget about the Europeans and Canadians. The Poker Masters is an American based event, and two of their finest poker proponents made the heads-up stage in Schulman and Matt Hyman.

Schulman began the heads-up encounter with a 4.2m v 2.1m chip lead, but both players would have their noses in front until Schulman found the right cards to pull away and finish the first event at the top of a very glittering pile.