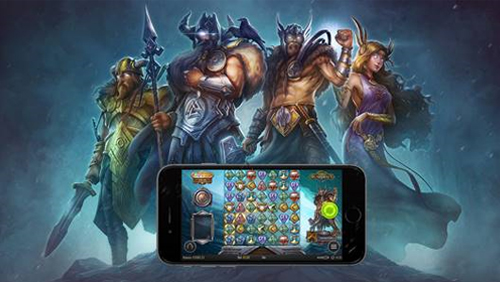 8th September, 2017 – Award-winning slots specialist Play’n GO has been nominated for the 2017 EGR Game of the Year, for its game Viking Runecraft.

The innovative grid slot, which transports players to a world of Norse Gods and Viking mythology, has been a smash-hit since its launch in April, with players enticed by its superb graphics and extensive gameplay.

The level-based game features a number of unique features in keeping with the theme, including the Charge of Destruction, Ragnarök free rounds and gift of the gods bonuses, all of which make it a truly immersive experience.

Players have taken to the game considerably since its release, with its omni-channel appeal ensuring it’s as exciting on mobile devices as it is on desktop. Likewise, operators have experienced the benefits to their bottom lines, with its popularity increasing week-on-week.

This highly sought-after award will be presented as part of the EGR Operator Awards, to be held at Grosvenor House, London, on 26th October 2017.

The winner will be decided by attendees of this year’s awards, who will be able to vote for their favourite game from the competitive shortlist.

Johan Törnqvist, CEO at Play’n GO, said: “Viking Runecraft has been a huge success since we released it earlier in the year and I’m thrilled it’s been nominated for EGR Game of the Year.

“I’d like to thank our designers and developers for producing such an immersive and hugely playable game that has introduced a number of new features to the slots market.

“The game has achieved an extraordinary feat in seeing its popularity increase since launch, and its revenue and average play time has consistently outperformed the market.”

Play’n GO continues to develop successful slots, primed for omni-channel, with the likes of Moon Princess and Leprechaun Goes To Hell proving a huge hit with players and operators alike.

Play’n GO is an award-winning supplier of high quality gaming content to many of the world’s leading casino brands.  Their genuine omni-channel solution can be tailored to suit the needs of individual online and land-based partners, regardless of geographical, regulatory, or market-specific requirements. Their games are developed in HTML5 to provide an enhanced user experience on all devices and operating systems. They are complemented by superior back-office administration tools which provide expansive reporting and marketing capabilities, ensuring operators are equipped to provide the ultimate gaming experience. The supplier’s extensive portfolio was recently recognised by the award of the IGA Slot Provider of the Year 2017 title. For more information about Play’n GO, who have offices in Sweden, Malta, Hungary, and the UK, please visit http://www.playngo.com.