News of a rampant rabbit winning the World Series of Poker Circuit Main Event in Rotterdam, and John Hesp secures a movie deal.

When someone comes to work wearing a pink rabbit hat, they are either blind or like a good laugh.

The 33-year-old Swiss poker player and Country Manager for 888Poker is a man caught up with the heartbeat of the second largest online poker room in the world.

He abhors #buzzkills, every single one of them.

And it’s a philosophy that works.

Bensimoun will go down in history as the first person to win a World Series of Poker Circuit (WSOPC) Main Event in the Holland Casino, Rotterdam.

Metaal’s appearance in the finale didn’t last long, exiting in ninth, but Lybaert made it to the cash rich final three sports, crashing and burning on the precipice of the heads-up encounter.

The rampant rabbit was responsible for the elimination of six of the eight players who sat alongside him for the final table photograph. The last carrot to go down the gullet was the German Jakob Miegel.

At one time, Miegel fought back from a 5:1 chip deficit, and would have surely won the thing, had a cockblocking ace not landed on the river in a three-bet pot with Bensimoun holding pocket jacks, and Miegel feeling the crowns of two kings.

I guess destiny has a sense of humour.

Bensimoun didn’t allow Miegel’s fight back to shake him, and as resolute as a man wearing a pink rabbit hat can be rallied back to take the title and the largest score of his pink rabbit hat wearing career. 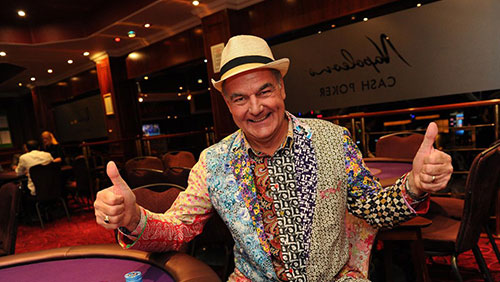 With Rotterdam out of the way, where next for the WSOPC?

The 64-year-old caravan salesman from that neck of the woods won $2.6m for his fourth place finish at the WSOP Main Event and is hoping that his new found stardom will allow him to persuade Jack Effel and co to make the trip to the North of England.

There’s more chance of a grandfather of seven, who has never played for a buy-in greater than £10, winning the WSOP Main Event, and having a movie made out of the experience than the WSOPC ending up in Bridlington.

Hesp – whose local casino Napoleons recently created the John Hesp chair, equipped with his patchwork quilt of a suit in upholstery – is 90% sure that a movie will go ahead, after agreeing in principle to work with a UK-based film production company.

Hesp told the Hull Daily Mail that several production companies approached him during his run, including some of Hollywood’s finest, but the proud Brit wanted a British firm to take the reins.

Who does Hesp want to play the lead role?