The Los Angeles Dodgers have been so dominant since before the MLB All-Star break that it is hard to imagine another team making a run as the World Series favorites before the regular season ends. Right now, the Dodgers are listed as +225 chalk as losers of just six games since the second half got underway on July 14.

Los Angeles owns the biggest division lead of any team in baseball at 20.5 games in the National League West, with the Washington Nationals owning a 14-game lead in the NL East. The Nationals (+700) are one of six other teams who could possibly challenge the Dodgers if they can catch lightning in a bottle and find a way to win at the right time. Washington lost to Los Angeles in last year’s NLDS and has never advanced in the playoffs. 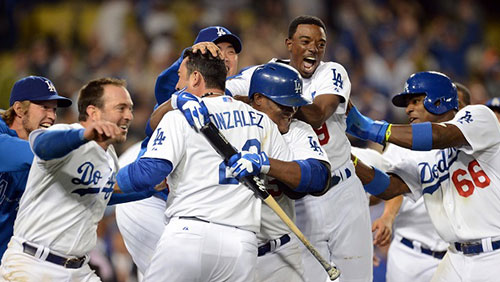 But the defending World Series champion Chicago Cubs might be the only other NL team capable of knocking out the Dodgers, as they were able to do just that in last year’s NLCS. However, the Cubs (+850) have serious starting pitching issues despite adding Jose Quintana prior to the trade deadline. With ace Jon Lester residing on the disabled list due to a shoulder injury, Chicago has little margin for error the rest of the way.

In the American League, four teams could get a shot at the World Series, including the Houston Astros (+500), Boston Red Sox (+700), Cleveland Indians (+700) and New York Yankees (+1200). The Astros have tailed off considerably after getting off to such a fast start in the first half of the season, going just 16-19 since the All-Star break. Still, Houston owns the best record in the AL and seems likely to earn home-field advantage.

The defending AL champion Indians could be the most dangerous team because of their experience and pitching, which is better than it was a year ago. The addition of slugger Edwin Encarnacion in the offseason has also paid off so far for Cleveland, with the former Toronto Blue Jay leading the team in both home runs and RBI.

In addition, the Red Sox have the top pitcher in the AL in Cy Young favorite Chris Sale, but the rest of the rotation remains questionable at best. The Yankees probably will not catch Boston for the AL East division title, although rookie Aaron Judge has his team in prime position to earn one of the league’s Wild Cards as an exciting dark-horse pick.