TAGs: Ken Cheng, Poker Night in America, Rotoworld, The King of the Hill

3: Barrels of pure value including a former professional poker player winning an award at the Edinburgh Fringe Festival, a reminder that New Hampshire is seeking an online gambling future, and Rotoworld sponsor Poker Night in America’s King of the Hill.

Poker is boring, but it doesn’t have to be. 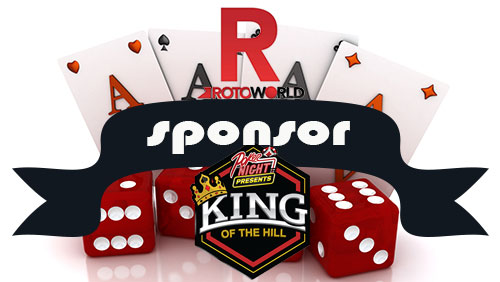 Ken Cheng, a professional poker player, and comedian, from the UK, won the 10th Annual Dave’s Funniest Joke of the Fringe award at the Edinburgh Fringe Festival this week.

Cheng spent a year studying maths at Cambridge University, before deciding to pursue a career as a professional poker player, while, at the same time, trying to build his reputation as a comedian.

Cheng created the YouTube character Mark Liu, where he advised people on crucial social issues such as dating, meeting like-minded people, and jerking off. In 2015, Cheng reached the final of the BBC New Comedy Awards losing out to the eventual winner Yuriko Kotani.

The winning joke went a little something like this:

“I am not a fan of the new pound coin, but then again, I hate all change.”

Where’s that video on jerking off?

If you think the joke is a little dry, you’re not alone. Speaking on the BBC’s Radio 4 show, Cheng said he was surprised his gag was a winner, because each time he uses it, people groan.

Cheng created the joke after the British government released the new 12-sided £1 coin, a rather expensive thing to do when you consider there will be no cash in the world in the future.

Cheng isn’t the only member of the poker community who fancies himself as a bit of a comedian. The World Poker Tour’s (WPT) Marketing Manager, Rich Ryan, also took to the stage this week for his first stint at stand up comedy, check it out.

Moving from one bad joke to another, and online gambling in the United States.

It’s a placeholder bill, so not much to get excited about yet. Ruddock believes the bill could allow operators from around the globe to offer New Hampshire residents their online gambling products due to the lack of land-based gambling operators in the state.

A hearing to discuss the bill takes place Sep 6.

In June, the state of New Hampshire became only the fifth US state to authorise online lottery sales, so they are not averse to a spot of online gambling.

Here is the bill, but be warned, it’s skeletal.

Rotoworld Sponsor Poker Night in America’s King of the Hill

I might be more interested in watching an amoeba conga than watching Poker Night in America’s King of the Hill event, but not everyone thinks the idea is as dumb and lazy as me.

The show has a new sponsor.

If you want to see who wins the $200k winner takes all event then check out the action on PokerNightTV’s Twitch channel, but be quick, rumour has it, Daniel Cates beat Frank Kassela in 10-minutes – it’s good to see that Rotoworld is getting full value from their investment.