Jay Lee wins WPT Choctaw; players give thumbs up to the Action Clock

A Chinese takeaway delivery driver wins the World Poker Tour Choctaw Main Event, as the players give the thumbs up to the introduction of the Action Clock.

I know I’m a little mischievous, but after the World Poker Tour (WPT) Champions Club member, Jordan Cristos, took to Twitter to lambast the WPT for introducing the Action Clock at all Main Events this year, I wanted him to win WPT Choctaw so badly.

“He nearly did,” said the man responsible for introducing the Action Clock, the WPT’s Matt Savage, “He took a terrible beat. Otherwise, he may have won.”

Despite his pre-tournament complaints, Cristos, was angelic once the action began.

My ten-month-old daughter knows the Action Clock provides the greatest players with a significant edge, and Cristos falls into that bracket. With the WPT opting to implement the Action Clock around the money bubble, it wasn’t a foregone conclusion that Cristos would even get to experience the pressure, but he did, eventually finishing in 20th place.

“We had already used the Action Clock successfully twice in our season ending Tournament of Champions and at WPT500 Los Angeles which gave us the confidence to move forward with this initiative,” Savage told me. “Poker players are hesitant to any change and while I had had this request from many leading up to the change the majority of the requests were from recreational, amateur, and businessman that felt the game had slowed to a crawl and become no longer enjoyable to play. We made a move in the best interest of the players which is what we always consider first on the World Poker Tour as we want to be very player friendly.” 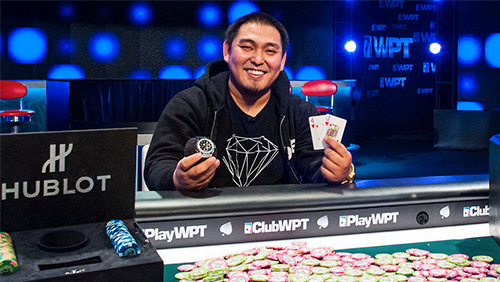 And it was a ‘recreational’ player who benefited the most at WPT Choctaw. For the past eight years, people have known Jay Lee as the man who delivers your Chinese takeaway on a Saturday night. He can buy a few Singapore Chow Mein’s with the $593,173 payday he received for beating James Hutton in ten-hands of heads-up action.

“The players in Choctaw were able to see the clock displayed over days 1A and 1B even though it was not implemented until one table outside the money which in this case was 108,” said Savage. “I have to say I was pleasantly surprised at how well it went with basically no issues whatsoever over the three days of use. We played 192 hands at the final table in six hours of actual play or about 32 hands an hour which is outstanding.”

And Eric Bunch rounded off a fantastic Choctaw Festival with a sixth place finish, a few days after finishing 4/3943 in the $1m GTD Monster Stack.

Lee also banked a $15k seat into the WPT TOC and a Hublot Big Bang Steel watch. His victory gives him an early lead on the WPT POY Leaderboard with 1,200 points. It’s worth remembering that the current WPT POY, Benjamin Zamani, began his fabulous season with a runner-up finish in the WPT Choctaw event.

And what was the player feedback like after the first WPT Main Event to include the Action Clock?

“Player feedback was great, and the most common suggestion was to start using the clock sooner and players accruing time extension chips if unused as players were given four chips at one table outside the money, six chips at 24, and eight at the Final Table,” said Savage. “I am pleased with the first run on the WPT Main Tour and look forward to the next stop at the Legends of Poker in Los Angeles.”

The Legends of Poker takes place August 25-31, 2017, at The Bicycle Hotel & Casino in Southern California.