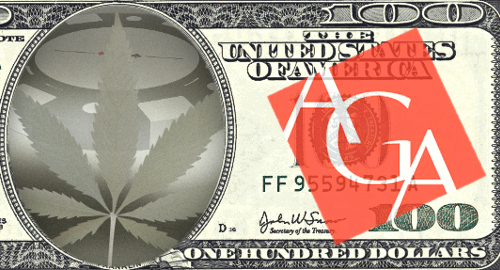 The US commercial casino lobby group wants the federal government to clarify its position on whether gaming operators can accept marijuana money at their tables and slots.

On Monday, the American Gaming Association (AGA) wrote a letter to Treasury Secretary Steven Mnuchin in response to the Treasury Department’s request for comments about federal regulations that can be “eliminated, modified or streamlined in order to reduce burdens” on industry.

Among the regulations that the AGA would like to see revised is the threshold for casinos to file Currency Transaction Reports (CTR). The current $10k threshold for cumulative transactions over a 24-hour period was imposed in 1972, and the AGA believes this should be increased to $60k to reflect the rate of inflation.

The AGA says the current threshold is so low that it “effectively captures transactions of little or no value to law enforcement” while noting that the casino industry files an estimated 1m CTRs per year, with each CTR taking about “45 minutes of effort” to compile.

The AGA also wants to streamline the filing of Suspicious Activity Reports (SAR) to eliminate “the detailed factual narratives” that casinos typically provide. The AGA notes that one-quarter of the SARs filed in 2016 involved customers suspected of attempting to evade the $10k reporting threshold, yet the feds rarely pursue prosecutions based on these SARs due to a lack of evidence that these funds come from illegal sources.

PUFF, PUFF, PASS?
The AGA also wants clarification on where casinos fit in the anti-marijuana policy outlined by the Treasury Department’s Financial Crimes Enforcement Network (FinCEN). In 2014, FinCEN warned casino operators that they couldn’t knowingly accept wagers from customers who worked in the medical marijuana industry.

The AGA claims that FinCEN’s marijuana guidance appears directed at banks and other financial institutions that deal with corporate entities, while casino patrons are mere individuals. The AGA wants specifics on casino operators’ obligations in preparing SARs for individuals who either own or work for state-licensed marijuana-related businesses.

FinCEN has stated that its anti-marijuana stance “is unaffected by any state law that legalizes marijuana-related activity.” Furthermore, new Attorney General Jeff Sessions is no fan of the herb, and erstwhile presidential spokeman Sean Spicer suggested in February that the new sheriff was likely to favor “greater enforcement” of federal pot prohibitions against pot-friendly states.

Prominent AGA members with a Nevada presence include Las Vegas Sands, whose owner Sheldon Adelson has actively campaigned against state-level marijuana initiatives. In June, the CEO of Massroots.com (“the social platform for marijuana”) reported being “permanently banned” from gambling at Wynn Resorts properties because the casino’s due diligence had revealed that the site “derives its income from marijuana businesses.”