The USC Trojans have not won a conference title in college football since nearly a decade ago when Pete Carroll was their head coach and before the Pac-10 became the Pac-12. However, USC has a legitimate Heisman Trophy candidate in sophomore quarterback Sam Darnold, and the school is expected to win the Pac-12 championship this year as the -110 favorite according to 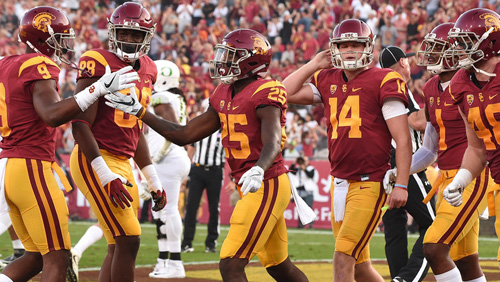 The over/under win total for the Trojans this season is listed at 9.5 with the over -180 chalk. USC is also +135 to make the four-team College Football Playoff field in 2017, and Darnold is a solid +275 favorite to win the Heisman.

The Washington Huskies have a top Heisman contender as well in junior quarterback Jake Browning, who is among the Top 10 choices to win it at +1800. The Huskies ended a seven-year reign by the Stanford Cardinal and Oregon Ducks as conference champions last year by going 12-2 and making it to the CFP semifinals. But Browning and Washington’s offense was shut down in a 24-7 loss to the Alabama Crimson Tide.

Browning enjoyed a stellar sophomore campaign for the Huskies in 2016 with 3,430 passing yards, 43 touchdowns and nine interceptions. By comparison, Darnold threw for 3,086 yards with 31 touchdowns and nine picks. USC went 10-3 last season but upset Washington 26-13 on the road last November 12 with Darnold passing for 287 yards and two touchdowns. Browning had 259 yards with one touchdown and two picks.

Like the Trojans and Huskies, the Bruins also have a Heisman candidate in junior quarterback Josh Rosen, who is looking to rebound from a rough sophomore year. Rosen only played the first six games due to a season-ending shoulder injury. He is expected to leave school for the NFL Draft and hopes to lead UCLA to a better year after going a disappointing 4-8 as the preseason Pac-12 South favorite in 2016.