Home / Business / 5 times a charm: The feds finally nailed the world’s most successful sports bettor, but not for gambling 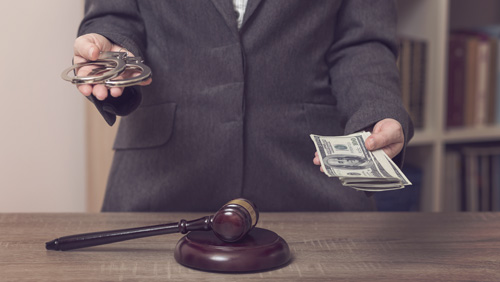 This is a guest contribution by Brian Saady. If you would like to submit a contribution please contact Bill Beatty for submission details. Thank you.

The ultimate “insider” in the world of sports betting, Billy Walters, was sentenced last week to five years in prison for leading an insider trading scheme. Understandably, this was a well-publicized case because Walters had received nonpublic information from a board member of Dean Foods. Walters also passed some of this information along to his personal friend, Phil Mickelson, who profited over $1 million from these tips.

However, by not pinning gambling charges on Billy Walters, this was a seemingly a bittersweet victory for some government officials. State and federal officials have tried to lock up Billy Walters for decades.

After a misdemeanor bookmaking conviction in 1982, he’s been indicted four times in high-profile gambling cases and beat the charges each time. Needless to say, those results have been embarrassing for the law enforcement community.

Billy Walters is the most successful sports gambler on the planet. Albeit, very few people truly know the secrets behind his success. Many people have speculated about the source of his “inside information,” but none of the rumors have ever been substantiated. Such speculation includes knowledge of fixed games, sports reporters supplying him with inside information –everything short of him having a sports almanac from the future like Biff Tannen in Back to the Future Part 2.

What we do know is that this former used-car salesman moved to Las Vegas from Kentucky not long after being busted for bookmaking in 1982. Walters linked up with one of the best sports-betting minds in the world, Michael Kent, a mathematician who had previously developed nuclear submarines. Kent and his partner, Ivan Mindlin (a former Las Vegas orthopedic surgeon), developed a computer program in the early 1980s that could consistently beat the Las Vegas point spread.

Within a fairly short period of time, Kent and Mindlin weren’t welcome at the Las Vegas sportsbooks. They began hiring runners, or “beards,” who acted as third-party couriers to place their bets. That’s where Billy Walters’ role began to evolve within this outfit that later became known as the “Computer Group.” Walters used his connections to establish a vast network of runners in numerous cities to place the Computer Group’s bets with bookies throughout the country.

A FBI special agent, Thomas B. Noble, was convinced that the Computer Group was not actually placing bets. Instead, he believed that this was a major mafia-connected bookmaking operation, i.e. taking bets, not placing bets. Noble led a fruitless six-year, million dollar investigation of the Computer Group. In 1985 FBI agents raided 43 of their offices, which were located throughout the nation. Five years later, Walters and 18 codefendants were indicted (two weeks before the statute of limitations expired).

Based on the facts, this case looked like a federal witch-hunt. However, Walters compounded his outlaw image by hiring Oscar Goodman, as his defense attorney. He was controversial choice as Oscar Goodman had represented various notorious mafia figures over the course of his career. (Fourteen years later, Goodman became the mayor of Las Vegas.)

Walters believed that the federal government also took unnecessary measures to make its presence felt. He reportedly called the authorities to turn himself in after being informed of the indictment. Nevertheless, his house was raided at gunpoint soon afterward when both his wife and mother-in-law were home. Billy Walters particularly took issue with his wife being arrested and placed in leg irons.

Ultimately, the prosecution’s case fell flat as there was no evidence that the Computer Group was taking bets. In fact, the defendants openly acknowledged that they placed sports wagers across states lines, which didn’t violate federal law. Walters was not convicted on any charges, nor were any of the other defendants.

Although undefeated in the courtroom, the Computer Group subsequently disbanded on its own due to money-related issues among the founders. Notably, one of the founders of the Computer Group, Michael Kent, was not indicted in that high-profile trial because cooperated with the FBI. Kent later sued his former partner, Ivan Mindlin, accusing him of denying his fair share of the profits.

Billy Walters subsequently went into business for himself and hired his own consultants. Armed with the knowledge acquired from his time with the Computer Group, he become the most renowned sports bettor of all time. He was able to consistently keep having winning seasons. Arguably more impressive, Billy Walters continued finding ways for his betting action to be accepted by bookmakers across the country.

Billy Walters established the most sophisticated network of beards. Each person used a codename and none of his runners knew who else was working for him. Walters masterfully played this secrecy to his advantage.

He often intentionally spread rumors that he was betting on a certain team and had his beards match that action. As a result, the sportsbooks routinely adjusted the point spread accordingly. After all, Billy Walters is the “smart money,” or in financial parlance his picks are essentially “inside information.” However, Walters often used that kind of subterfuge to place much larger wagers on the opposite team after the line had been shifted in his favor.

Understandably, this gambling maverick was viewed as a menace by some moral crusaders in the federal government. However, it may be surprising that Walters was also targeted by Nevada officials as well. He was indicted on various gambling charges by the Nevada Attorney General on the three separate occasions, but the prosecutors failed to gain a conviction each time.

In a display of power by the casino lobby, the state of Nevada also seemingly responded to Walters’ exploits by creating “messenger betting laws,” which bar people from placing bets for other people. A few of his runners have been charged with this crime.

After avoiding a conviction for three decades, Walters may have felt bulletproof. After all, he had built up tremendous goodwill with the media from being subjected to multiple wasteful and unnecessary prosecutions. And he used the opportunity during an interview in 2011 with 60 Minutes to clear the air about his industry. After all, Walters’ profession has a stigma associated with it. Society, in general, obviously doesn’t view a legendary gambler like Walters in the same light as say…a successful Wall Street trader.

Walters acknowledged that he encountered numerous shady individuals in the gambling world. However, he pointed out that he met far more crooks in corporate America. To back up this claim, Walters said that he lost a small fortune with three notoriously scandal-ridden companies, Enron, WorldCom, and Tyco.

It’s no secret that white-collar crime is rampant in America. However, it was a bold assertion by Walters to claim that there is more honesty in the sports gambling world industry than on Wall Street. After all, the majority of his bets were presumably placed with illegal bookmakers. Outside of Nevada, there are no legally binding contracts in the sports betting world, only handshake agreements. Yet, Walters managed to become a multi-millionaire in underground industry is backed solely by word of mouth and an honor system.

Ironically, Walters’ undoing came as a result of him entering the “respectable” world of finance. Bear in mind, the Computer Group revolutionized the sports gambling industry in a similar manner to the high-speed computers and complex mathematical algorithms that dominate Wall Street trading today. However, many of the tricks of the trade in the underground gambling world, such as insider trading and market manipulation, are not legal within regulated financial markets.

Billy Walters was convicted on charges that were similar to the crooked behavior that he scorned on 60 Minutes. And, apparently, a federal agent couldn’t resist leaking the confidential details of an ongoing investigation to the press before Walters was indicted for insider trading. FBI agent, David Chaves, admitted that he was a “significant source of confidential information to reporters.”

In response, Walters’ attorneys filed a motion to dismiss his case by arguing that the leaks ruined their client’s chances for a fair trial. The judge denied this request, but he noted that it was “truly ironic” that a government official was involved in misconduct with confidential information while investigating Walters for crimes related to confidential information.

However, one more question remains. Did the federal government violate the law to gain this conviction in what appeared to be a slam dunk case? The defense attorneys for Walters have made allegations that point to prosecutorial overreach.

The star witness for the prosecution, former Dean Foods board chairman Thomas Davis, testified that he received a pre-paid throwaway phone from Walters. According to the prosecution, the “bat phone” was used for secretly providing insider trading tips. However, Walters’ defense attorneys showed phone records demonstrating that the phone had been used to call escort agencies. More important, they claim that Davis acquired that phone after the suspicious trades had occurred. Hence, they allege that Davis perjured himself. The defense attorneys for Walters have filed a motion to have his conviction overturned.

In addition to a sentence of five years in prison, Walters must pay a $10 million fine. Ultimately, Walters was found guilty of profiting $43 million in ill-gotten gains with insider information. That means that the hustler who was raised in the pool halls of Kentucky ended up committing the same kind of white-collar crime that is often abused by Ivy-league crooks.

Brian Saady is the author of Dealing From the Bottom of the Deck: Hypocritical Gambling Laws Enrich Crooked Politicians, a Select-Few Casinos, and the Mob. His three-book series, Rackets, is about the legalization of drugs & gambling, and the decriminalization of prostitution.