Home / Poker / WSOP review: Adrian Moreno wins the Little One for One Drop 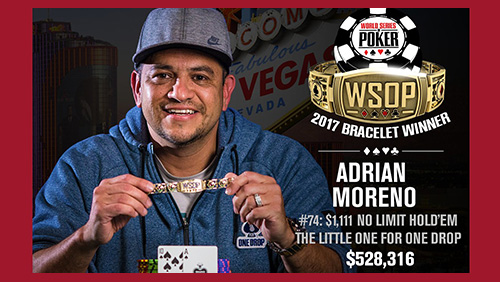 A trade show decorator from Los Angeles beats an air traffic controller from Norway in the heads-up phase of the $1,111 Little One for One Drop raising close to a million dollars for charity in the process.

Adrian Moreno began the World Series of Poker (WSOP) with a win, and he ended it in the same way.

The 48-year-old trade show decorator from Los Angeles, defeated 81 entrants to win a $235 Rio Daily Deepstacks on May 31, and six weeks later took down the penultimate event of the series, the $1,111 Little One For One Drop.

As a part-time poker player, that opening salvo was crucial for Moreno, who went on to finish 19/8120 in the Crazy Eights event, and 23/6716 in the Monster Stack. At one point he was 11/12 in the chip counts and even began the heads-up phase with a 3:1 deficit, but he was simmering under the surface and began boiling at the right time.

When there were 12 players left, Matt Berkey, held almost two-thirds of the total chips in play. The Solve For Why founder is one of the most experienced high stakes cash game players in the biz, and he fast becoming half-decent at this MTT lark.

But it wasn’t meant to be Berkey’s golden moment.

“He just lost some big hands,” Moreno told the WSOP after his win.

Berkey exited in third place, leaving Moreno facing the Norwegian air traffic controller, Martin Lesjoe, in heads up action. The dogfight lasted two-hours until Moreno finally shot Lesjoe down to take the first prize of $528,316 and the gold bracelet.

Moments after his win, Moreno sat down in a chair and wept. His friend had recently passed away, and Moreno had dedicated this run in his honour.

The event attracted 4,391 players and raised $992,000 for the One Drop Foundation, the non-profit, founded by the Cirque du Soleil owner Guy Laliberte, to raise funds for global clean water initiatives.

Here are the previous winners of the event: