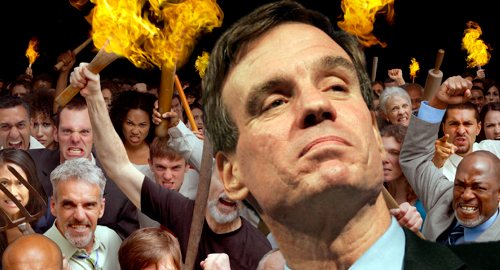 The push to roll back legal online gambling in the United States has taken a more bipartisan turn after a Democratic senator urging the Department of Justice to open a can of legal whoop-ass.

On Tuesday, The Hill reported that Sen. Mark Warner (D-VA) had written a letter to Attorney General Jeff Sessions urging him to make good on his promise/threat to “revisit” the 2011 DOJ opinion that allowed individual states to decide for themselves whether to permit intrastate online gambling, so long as it didn’t involve sports betting.

Warner’s letter contains a greatest hits package of the usual anti-online canards, i.e. money laundering, collusion, and the “heightened threat to economically vulnerable populations.” (For the record, countless studies show that online gambling caters to individuals in higher economic brackets, while state-run lotteries overwhelmingly depend on those at the bottom of the scale.)

In addition to his logic being off the mark, Warner’s July 5th letter is also behind the times. Session made his “revisit” vow during his confirmation hearing in January, but Bloomberg reported late last month that Sessions had recused himself from further discussion on the online gambling question due to his ties to a lawyer that has lobbied on behalf of the Sheldon Adelson-financed Coalition to Stop Internet Gambling (CSIG).

With the exception of Sen. Diane Feinstein (D-CA), most of the congressional anti-online brigade has been on the Republican side of the aisle, with various GOP senators and representatives lining up to introduce versions of the Adelson-supported Restoration of America’s Wire Act (RAWA) in order to drink deep at Adelson’s bottomless well of campaign funds.

Rep. Charlie Dent (R-PA), whose district (surprise!) includes Adelson’s Sands Bethlehem casino, is rumored to be preparing to slip RAWA-type language into a must-pass Appropriations bill, similar to how the GOP slipped the 2006 Unlawful Internet Gambling Enforcement Act into an unrelated homeland security bill while no one was watching.

On Monday, the House Appropriations Committee announced that it intended to approve all fiscal 2018 spending bills by the end of this week. It remains to be seen if Charlie’s legislative sleight of hand will go undetected by the more libertarian factions of his party, which have slammed RAWA as the antithesis of the states’ rights the GOP professes to adore.