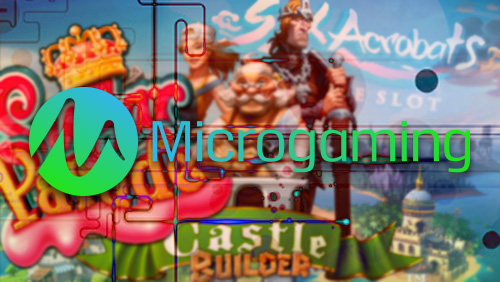 ISLE OF MAN – Microgaming’s new additions will treat players to sweet rewards and captivating stunts, and transport them to magnificent castles this July!

Six Acrobats brings the thrill and wonder of a Chinese acrobatic show to online gaming. There’s a fire eater, knife thrower, balancing acrobat, Chinese Yo Yo and a multi-plate spinning girl. Showcased via breath-taking animations, this five reel, nine-line game, is a modern take on this traditional theatre act.

The game’s engine is simple but exciting, with a 5x multiplier for wild symbols in the base game and a heart pounding 25x multiplier for wild symbol wins in free spins. The Golden Queen scatter, represented by Guanyin, grants players good fortune the more she appears. Three or more of these scatter symbols will award 15, 20 or 25 free spins, during which, each scatter symbol that lands awards one extra free spin!

With winnings up to 390,000 credits, players are sure to be captivated by the grace and power of Six Acrobats. Watch the promotional video .

This delectable game comes jam-packed with vibrant characters, a catchy soundtrack, wilds and scatter symbols that can trigger 10 free spins where all wins are tripled. Players can also claim their fortune with the Queen’s Royal Bonus where they can choose up to five tantalising treats for guaranteed wins!

Designed to be bright and cheerful, Sugar Parade will be one delicious treat players won’t want to miss. Watch the promotional video here.

Gamification meets online gaming in Castle Builder ll, which lets players choose between three avatars, each with their own storyline and bonus features. Players can explore 15 kingdoms ranging from peaceful provinces, snowy mountains, wild jungles and vast deserts through the gates of hell to finally reach the skies. Players collect the finest building material to build 75 castles, interact with over 300 characters, earn trophies and unlock more than 100 achievements.

Featuring expanding wilds, free spins, wild symbols and bonus games, this game is a sequel to the immensely popular Castle Builder online slot, an EGR Game of the Year 2013 nominee. This epic five-reel, 15-payline slot takes gaming to the next level with exciting, achievement-based rewards.

David Reynolds, Games Publisher at Microgaming, comments: “Once again we are delivering a real mix of games to the market, distributing titles that will appeal to different audiences. Six Acrobats pays respect to the wonderful skill of acrobatics, with animations designed to emulate movements seen in Chinese shadow puppet theatre, and low symbols hand-calligraphed by artists. While Sugar Parade is a bright and vibrant slot, with a memorable soundtrack and an engine jam-packed with treats that reflects the game’s fun theme.”

“Last, but certainly not least, Castle Builder II needs no introduction. Having showcased the game on Day 3 of ICE Totally Gaming, this eagerly-awaited game bridges the gap between online and social gaming.”

For the entire month of July it’s Game On!
Press Releases
10 hours Ago