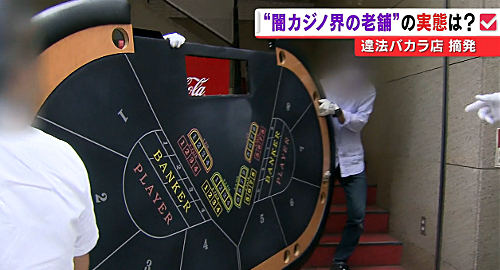 The Japanese city of Osaka has broken up what local authorities are calling the biggest – and possibly oldest – illegal gambling den they’ve encountered in years.

On Monday, Osaka Prefectural Police arrested 24 individuals after disrupting a major illegal baccarat casino operating out of a building in the Minami entertainment district. Police seized five gaming tables and ¥9m (US $80k) in cash, along with a further ¥200m ($1.8m) in cash in subsequent searches of buildings connected to the gambling operation.

The police officers who conducted Monday’s raid arrested the 41-year-old casino manager, who reportedly copped to operating the illegal gambling den, which ran 24 hours a day. In addition to the manager, police arrested nine casino employees and 14 gamblers. A further 26 staff and customers were questioned.

Police say the operation had elaborate security procedures, including a double-door guarding the entrance and 40 surveillance cameras located inside and outside the venue. The fourth-floor gaming den wasn’t directly accessible via elevator, meaning customers had to first alert casino staff, who would escort customers to floors above or below the casino, then lead them to their gambling promised land.

One longtime resident of the area told MBS News that the locals were well aware that gambling was available at the building in question. The man guessed that the illegal casino may have been operating for over two decades, possibly making it Japan’s longest serving gambling den.

Osaka is considered a frontrunner to land one of Japan’s promised integrated resorts. The country’s politicians are frantically trying to finalize secondary casino legislation that will establish, among a great many other things, how many integrated resort licenses will be made available and which jurisdictions will be allowed to host casino operations.

The government is reportedly planning to impose weekly and monthly limits on the number of times local residents will be able to visit the new casinos, which will likely ensure that illegal gambling dens will still have a role to play in Japan’s new gambling regime.