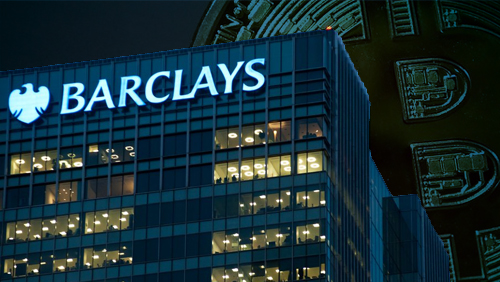 Banking giant Barclays has reportedly broached the topic of digital currencies “the equivalent of bitcoin” to UK’s top financial regulator.

Specifically, Britain’s largest bank pitched the idea of bringing cryptocurrencies “into play” to the Financial Conduct Authority (FCA), CEO Ashok Vaswani told CNBC. Vaswani did not elaborate on what the “play” means, but he noted that the bank has been with working with the financial regulator as well as fintech start-ups for projects focusing on blockchain.

“We have been talking to a couple of fintechs and have actually gone with the fintechs to the FCA to talk about how we could bring, the equivalent of bitcoin, not necessarily bitcoin, but cryptocurrencies into play,” Vaswani told the news outlet.

Despite being known for fostering innovation in the fintech space, the FCA is cautious towards investing in cryptocurrencies. Recently, the financial regulator underlined the volatility of cryptocurrency as it urged the public to be wary of trading in digital currencies like bitcoin.

Speaking at a blockchain event, Chris Woolard, executive director of strategy and competition at FCA, acknowledged that the growing interest among investors has led to an increase in trading, reported The Financial News London. The official, however, underscored digital currency’s decentralized nature, claiming that novice investors may be mistaken into thinking their cryptocurrency investments are protected just like investments in traditional financial instruments.

“I’m not saying that we view digital currencies as an inherently bad thing… but we do have to exercise a degree of caution,” Woolard said, according to the report.

Bitcoin has been steadily garnering plenty of interest recently, particularly among gambling operators in the country who have been looking for an alternative payment method. Last year, the UK Gambling Commission added digital currencies like bitcoin to its list of acceptable payment methods available to its licensees.

Allowing the use of digital currencies as mode of payment will reduce the risk of money laundering activity, which, incidentally, is what big banks fear may happen given the cryptocurrencies’ “dark web” history.

But digital currency has already put its dark past behind, and financial institutions as well as regulators around the world have started to take notice. Japan, for example, has started allowing the use of bitcoin as a mode of payment, while Russia is looking at ways to regulate the digital currency sector.

Bitcoin had a downward start to the week, as prices fell to a low of $2,414.79 during Tuesday afternoon’s trading.