Two of the biggest surprises in baseball so far this season have probably been the surprisingly good play of the New York Yankees and the mediocre performance of the defending World Series champion Chicago Cubs.

However, no team has been more impressive through the first three months than the MLB-leading Houston Astros, who are +500 favorites to bring home their first World Series title. 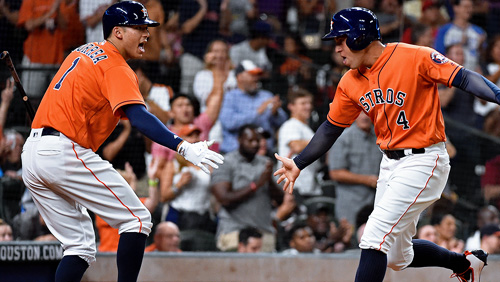 The Astros are running away from their competition in the American League West, and it would be shocking if any of the other teams overtook them for the division lead in the second half. But the Yankees and Cubs both find themselves in extremely close races and could be battling to get into the postseason all the way into late September.

New York just ended a seven-game losing streak on Wednesday to remain a half-game ahead of the Boston Red Sox in the AL East division standings. The Yankees are +1200 to win their first World Series since 2009 while the Red Sox are still ahead of them on the betting board at +750.

The AL Central-leading Cleveland Indians are also +750 as they try to stay hot and put themselves in prime position to win a second consecutive pennant this year.

Chicago finds itself behind the Milwaukee Brewers (+6600) of all teams in the National League Central and finally got back over the .500 mark this week. Whether or not the Cubs can stay there remains to be seen, but they have gotten better pitching lately and will need to continue that trend if they are going to be back in the playoffs in October.

The Washington Nationals are viewed as Chicago’s top competition in the NL along with the Los Angeles Dodgers, and each of them are leading their respective divisions. The Nationals and Dodgers are both listed at +650 to win the World Series.

Like Houston, Washington has a huge lead in the NL East and will be looking to earn home-field advantage throughout the postseason. Meanwhile, Los Angeles is hoping to hold off the Colorado Rockies (+1200) and Arizona Diamondbacks (+1600) in a tighter NL West race and knocked out the Nats in the 2016 NLDS before falling to Chicago in the NLCS.