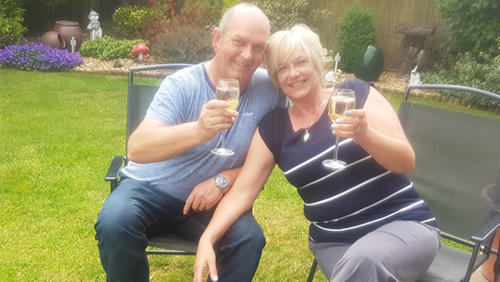 A 47-year-old woman from Milton Keynes couldn’t believe her luck when she bet just 25p on an online game and netted herself the £1.3m jackpot.

Online gaming company bgo has revealed that Angela New won the staggering prize on her favourite game, Gladiator, based on the Ridley Scott movie of the same name. A busy working mum of two children aged, Angela would normally be getting her kids ready for school in the morning, but during the half term holidays Angela had a moment of downtime and decided to log onto her bgo account while her children and husband were still asleep.

As soon as she hit the multi-million-pound prize Angela ran upstairs screaming, waking up her husband who had been on a night shift from his job as a long-distance lorry driver. “I saw the amount and felt like I was in a dream,” she said. “I just felt sick and didn’t know what to do with myself. It’s just completely amazing and will change everything for us – we can pay off the mortgage, clear all of our bills and even give up work for a bit.”

Allan Turner, Head of Marketing at bgo comments: “We’ve had some fantastic wins on bgo in the past few months totaling a staggering £250m and we’re really pleased for Angela and her family – what a result! It shows that even by placing small bets you can win really big on your favourite games, whatever the odds!”

bgo launched in 2012 with an objective to bring to market the best casino, bingo and slot products under one brand, focused on delivering an exceptional player experience. For more information visit bgo.com.

Bgo.com was launched in 2012 and is one of the fastest growing gaming companies in the UK. It has won awards due to its innovative ‘Hollywood’ marketing strategy and is known as one of the countries more exciting gaming brands. bgo is a multi-gaming site offering players a great range of casino games, slot games, live dealer casino games and bingo games all from the same site. New players at bgo can currently enjoy £10 free when they register and double their first deposit up to £100.