Macau, China, June 2017 – We knew it would be a quick Day 3 at the APT Main Event with only 20 players remaining and two places to the money. And we weren’t wrong. In just two 60-minute rounds, the Final 8 was determined with Germany’s Kilian Loeffler sitting on top backed by 1,163,000 in chips. The APT Main Event began three days ago at the Macau Billionaire Poker room in Babylon Casino with 118 players ponying up the HKD 19,800 entry fee. This generated a plump prize pool of HKD 2,039,000 with 18 players ultimately getting a cut.

Earlier today that cut began to flow after the elimination of China’s Wang Bin as the bubble. Luckily for Bin, he was insured with bubble protection so he didn’t leave completely empty-handed. From there, short stacks were pretty much on the loose, all of them less afraid to shove now that the money was guaranteed.

The next game-changing fallout was China’s Wang Ye who just missed the unofficial final table. Ye was short stacked coming into Day 3 and was never able to bring his stack back up to par. With the ten remaining players now merged into one table, Loeffler and Oliver began to take control of the felt. Between the two, it was Loeffler who capitalized on two pots to earn him the leader’s status at the end of the day. On one of those hands, Loeffler claimed a chunk of Choong Kian Weng’s stack in a trips over trips hand. Click here for the Hand History. 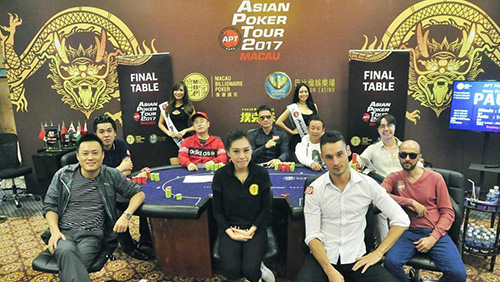 Not long after, Loeffler dusted Jaydeep Dawer in 10th place, and after Norway’s Henrik Tollefsen was railed by Peng Fei Liu in 9th place, Day 3 ended with the Final 8 established. Here is a look at them according to chip rank:

Hajime Iwakura – Japan – 510,000 – an APT regular with three APT side event trophies including a High Rollers title earned back in 2015

Shravan Chhabria – India – 367,000 – his deepest APT run was a 3rd place finish at the Monster Stack event in 2015; last year he cashed at the WSOP Main Event

Xu Dong Hui – China – 263,000 – this is his first final table appearance in a major poker tournament

The Final 8 players will be on the hunt for the HKD 521,000 first place purse and the exclusive APT Championship Ring. The eventual winner will not only be claiming their first APT Championship title but they will also be shipping in their largest ever live tournament payout to-date.

We will be bringing you all the action in our Live Updates page. You can also view the chip counts, payouts, and the action from the previous days in the same page.
The Final 8 begins at 130pm on Wednesday, June 21, 2017.