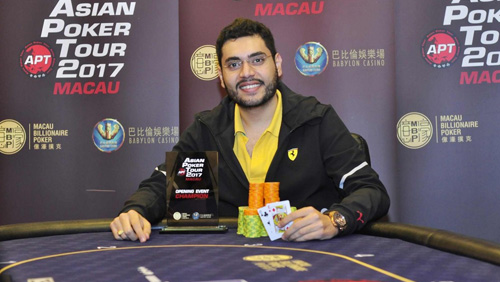 Macau, China, June 15, 2017 – It was a big day for India’s Zarvan Tumboli who entered the final day of the Opening Event 300K Guaranteed with a stack below average then turned it up to run away with the first trophy and the HKD 74,300 cold hard cash first prize.

The APT Macau 2017 kicked off its second day of the series with 36 players returning for the Opening Event at the Macau Billionaire Poker room in the Babylon Casino. At the helm was Japan’s Ryota Hisayama who bagged up the largest stack on the previous day. Hisayama continued his impressive performance, holding on to the chip lead for a good part of the day, then making it into the final heads up round to try and bring it all home. While we know the final results, the roller coaster action leading up to Tumboli’s victory was really the meat of the story.

The battle for the title

Prior to the final duel, Tumobli eliminated Yuan Hang Zhong in 3rd place to edge Hisayama 2:1 in chips. As soon as the action resumed, Tumboli asked Hisayama if he was interested in a deal. It was declined. From there, it was game time for the first trophy of the series.

It was Hisayama who took off to a good start, winning several hands until the lead was soon his holding A♦5♣ on a board of A♣ 4♣ 8♣ 3♠ 8♦. Tumboli grinded it up back to even then retook a 2:1 lead after claiming a big pot that saw a three-bet preflop. Tumboli check-raised all in on the flop of 10♥ 6♦ A♦ and Hisayama folded.

However, Tumboli’s hold at the top didn’t last long with Hisayama again retaliating. Both players were all in preflop, Tumboli with Q♣ 8♥ and Hisayama with A♠ 10♣. The cards ran 10♠ Q♠ 4♦ 8♣ giving Tumboli a near victory with his two pair but with a river 10♦, Hisayama improved to trips and it was another 2:1 switch up, this time to Hisayama’s favor.

The next heavy clash happened on a flop of 7♣ 5♣ 8♥, both players sent their chips to the middle. Hisayama had A♠ 8♣ top pair while Tumboli had 8♦ 5♦ two pair. The next two cards were blank and Tumboli was back up to over 2:1 in chips. That must have been the golden moment because from then on, Tumboli began to pull away until Hisayama moved all in with Q♦ 10♠ and faced Tumboli’s K♦ 6♣. The spread came Q♥ 4♠ 4♣, instantly jumping Hisayama out in front, but with the K♥ turn it was near over. The10♥ river ended the game and Tumboli captured the victory. For his efforts, Hisayama earned HKD 43,500 for his runner-up finish.

Payouts will be posted soon in the Events & Results page

Coming off a 6th place finish at the Opening Event, Japanese pro Tetsuya Tsuchikawa entered the Ante Up for Charity event then took it all the way to the finish line. The event for the benefit of the Holy House of Mercy Macau drew in 19 players for a generous HKD 9,500 donation to the charity organization. The rest went to the prize pool with Tsuchikawa claiming the HKD 9,500 top prize and the event trophy.

Watch some of the first day fun in our daily highlights video posted in the APT YouTube channel.