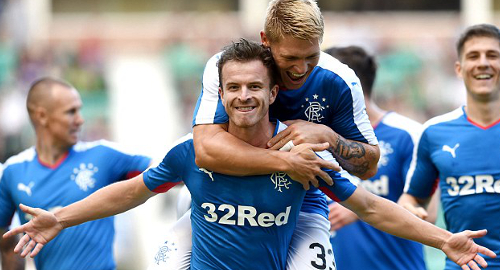 On Wednesday, Rangers management announced that the team had extended its current shirt sponsorship deal with 32Red for a further two seasons. 32Red, which is now part of the Kindred Group, has had its logo on Rangers’ kit since 2014.

Rangers managing director Stewart Robertson said the Scottish Premiership mainstays had fielded a number of offers to take over the shirt sponsorship but the club opted to stay with 32Red. Robertson said 32Red “have been with Rangers every step of the way as we progressed from the lower leagues back to the top flight” and the club hopes to build on this association in the next two years.

In other sponsorship news, Sky Betting & Gaming has inked a three-year deal to become the new official betting and gaming partner of the Yorkshire County Cricket Club. The deal will offer Sky Bet a variety of branding options both on the club’s Headingley grounds as well as via its digital channels.

Sky Betting & Gaming CEO Richard Flint noted that Yorkshire “has been our home ever since we were founded back in 2001 so we are thrilled to be backing our local team.” The Club’s commercial director Andy Dawson said he was delighted to be teaming with a betting operator that was “committed in helping us add to the matchday experience.”

Switching to the continent, Russian online sports betting operator Liga Stavok has signed on as the new title sponsor of the Russian Premier League’s 2017-18 season. Terms of the one-year deal weren’t disclosed but Liga Stavok beat out three other betting rivals via an open tender for the rights to advertise via television broadcasts of League games, at League stadiums and via other promotional channels.

Nearby, Planetwin365 has signed on as the first official betting partner of the Football Association of Serbia. The two-year deal will see Planetwin365, which is part of the SKS365 online gambling group, also serve as a platinum sponsor of the FAS.