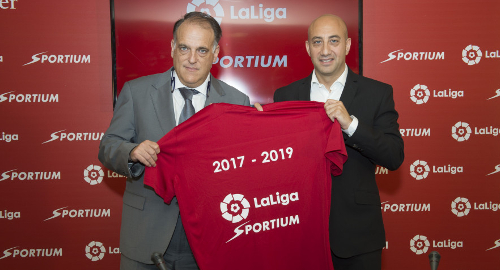 Late last week, Sportium announced that it had extended its official betting partnership with La Liga for another two years. Sportium, the joint venture of local gaming operator Cirsa and UK bookmakers Ladbrokes, originally signed on with La Liga in 2014 and the new pact will extend their relationship through the 2018-19 season.

Sportium CEO Alberto Eljarrat said the relationship with La Liga “has been a success from the start,” with the operator enjoying “great exposure” for its brand. La Liga president Javier Tebas was equally chuffed, saying the parties had forged “close ties” over their three-years-and-counting partnership, so why not keep things in the family?

Sportium clearly values its Spanish sports connection, having last year added a multi-year betting partnership with the country’s top basketball league, the Liga Endesa. Terms of the La Liga extension weren’t disclosed, but Eljarrat said the Spanish bookmaking market was “a very competitive sector” and Sportium hadn’t been the only company looking to enjoy some primo La Liga exposure, so one can assume it didn’t come cheaply.

That said, Spanish operators have been getting some assistance from gaming regulators, who have been cracking down on local sports franchises inking deals with Asian online betting operators who lack Spanish gaming licenses. La Liga side Real Betis was forced to end its shirt sponsorship with UED Sports last summer due to that company’s links to Philippines-licensed UEDBET.

The online betting industry has become increasingly important for Spanish sports franchises’ bottom line. Figures compiled by the JDigital online gambling industry association and shared with AzarPlus indicate that the total investment in sponsorships and advertising by Spanish-licensed online sports betting operators with local sports totaled €138m in 2016, a 3.5% gain over 2015’s total.

The figure is much greater when other online operators (casino, bingo, etc.) are factored in. All told, Spanish-licensed online gambling companies invested €226.5m in sports-related marketing activity in 2016, nearly 38% higher than the previous year. Bookmakers’ share of this total fell from 81% to 61% from 2015 to 2016.