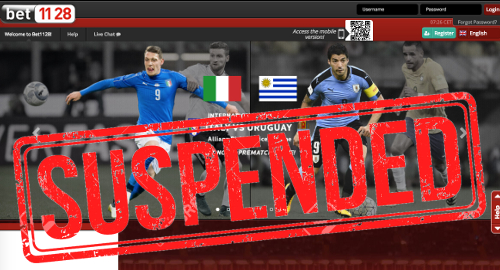 On Tuesday, the Malta Gaming Authority (MGA) announced that it had suspended CenturionBet’s remote gambling license, and ordered the company to “indefinitely suspend all gaming operations, cease to register new players, suspend all transactions on all websites, including deposits and withdrawals,” and fully comply with MGA requests for data and documentation.

The MGA notice insists that all websites operating under CenturionBet’s license are “not approved to be operational by the Authority.” However, at present, the Bet1128.com site still prominently displays the MGA logo and the suspended MGA/CL2/527/2008 license number.

Italian gaming news agency Agimeg quoted a CenturionBet statement saying the MGA had “identified procedural irregularities in signing contracts with consultants.” The company expressed “deep regret” over the kerfuffle, while insisting that it had “acted in full compliance” with its regulatory obligations and promising that “all the payment activities of the winnings will be guaranteed.”

Last month, Agimeg reported that CenturionBet had attempted to sell 80% of its operations for €12m to online gambling operator SKS365, which operates in Italy under the Planetwin brand. SKS365 claimed that it receives lots of these types of offers, but that these particular negotiations “did not materialize.”

The CenturionBet/Bet1128 business has a colorful history in Italy, where investigators have fingered the site’s owner as Francesco Martiradonna, who has been linked to the Sacra Corona Unita crime syndicate. Last October, the Martiradonna family’s lawyer denied any links between the family and CenturionBet, despite Italian media reports that linked two Martiradonna brothers as managers of gambling operations that shared Maltese addresses with CenturionBet.

Two years ago, Italian authorities launched a major crackdown on the illegal gambling operations of Malta-licensed online betting site Betuniq, which was accused of having ties to the ‘Ndrangheta crime family. The MGA subsequently suspended the licenses of a number of associated online operators.

A more recent anti-mafia operation that Italian authorities dubbed ‘Jonny’ linked the CenturionBet operations to the ‘Ndrangheta syndicate, which reportedly earned €1.3m over a 17-month period for allowing CenturionBet to set up internet-connected retail operations on ‘Ndrangheta-controlled territory.