Manila, Philippines, June 2, 2017 – Lloyd Fontillas who has been with the Asian Poker Tour since 2009 and appointed as Executive Tournament Director early last year, will now add another feather to his cap as he joins the Board of Directors of the prestigious Poker Tournament Directors Association (Poker TDA). 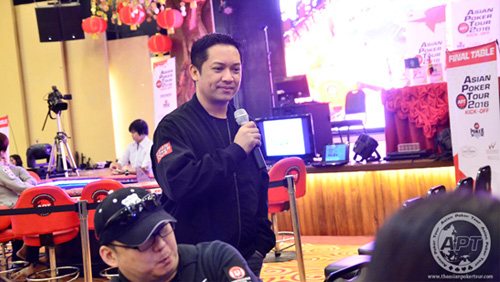 Fontillas will formally be welcomed to the board during the 2017 Poker TDA Summit VIII to be held on June 30th and July 1st 2017 at the Aria Las Vegas, USA.

Lloyd Fontillas is Executive Tournament Director of the Asian Poker Tour and one of the most experienced and respected TD’s in the world.

A native of Kingsville, Texas Lloyd went to high school in the Philippines before returning to the U.S. to start his career. While working at a cannery in Kodiak, Alaska his mother called with a job offer at Bay 101 Casino in San Jose, California. Not yet of legal gambling age, Lloyd started as a bus boy at Bay 101. When he turned 21 he played his first 2-4 limit game, recalling: “I won a mountain of chips and was hooked for life.”

Lloyd became a poker dealer and studied every aspect of the game eventually moving up to the Tournament Director position. He subsequently served on tournament management teams for the World Poker Tour and World Series of Poker before joining the Asian Poker Tour in 2009. Today, from his home base in the Philippines, Lloyd manages all APT tournaments worldwide.

He believes the most important role of a TD is “to listen to players and do your best to make the next event even better.” As such Lloyd is an innovator, always willing to try new game types and tournament features. He describes the winning APT formula as: “great floor people, player-friendly buy-ins and structures, a beautiful venue, a players’ party, live streaming and a great award ceremony. The overall experience is the great product we deliver to the players.”

Lloyd attributes his success in part to experience gained working with such industry legends as: Matt Savage, Jack Effel, Sam Quinto, and APT CEO Jeff Mann. Lloyd looks forward to sharing his knowledge with the next generation of poker professionals, and helping to further standardize the TDA Rules, especially in Asia which he sees as one of the world’s fastest-growing markets.

About The Poker TDA

The TDA is the official association of poker tournament personnel. The Association is dedicated to the advancement of the industry and adoption of uniform poker tournament rules. The TDA was founded in 2001 by gaming professionals Matt Savage, Linda Johnson, Jan Fisher, and David Lamb. Since inception, the Association  has grown to over 2,500 members in 63 countries. Joining the founders on the Board are industry veterans Jack Effel, Neil Johnson, Tab Duchateau, Johnny Grooms and Mike Bishop.