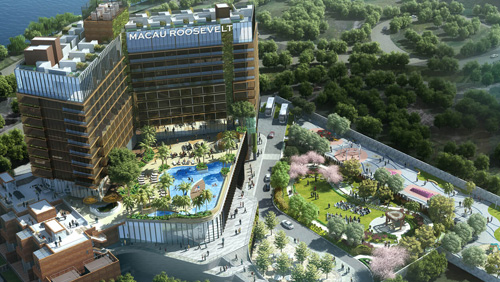 A new satellite casino focusing on table games is coming to Cotai.

New exterior signage erected outside the hotel confirmed the rumors that the five-star hotel will host a gaming facility, the brokerage said in a note.

The Macau Jockey Club is already home to the Casino Macau Jockey Club, which is one of the three satellite casinos under Paradise Entertainment, but it is understood that the new casino will be located on the same parcel of land. According to Union Gaming analyst Grant Govertsen, a company filing stated that “as of 1 January 2017 the casino was changed from casino management services to a revenue sharing agreement on LMG games (LT Game stadium ETGs),” which indicates that “the license can be moved rather than require obtaining a from-scratch new license.”

The new casino at the Roosevelt hotel is also expected to be “significantly larger in size” compared to the Casino Macau Jockey Club and will be focused largely on table games.

“We estimate it could have 25-35 tables and around 100 slots,” Govertsen said. “This compares to the equivalent of just four live tables at the predecessor casino and therefore suggests that it will need a greater allocation of tables that are currently operating at the site.”

Union Gaming said it wouldn’t be surprised if the Macau Jockey Club Casino will have a niche that is not often covered by satellite casinos.

“We would not be surprised if the new casino at Roosevelt were to have a unique junket focus, or go after a particular customer niche that is currently unaddressed (e.g. targeting customers from a non-Chinese geography),” the brokerage said.