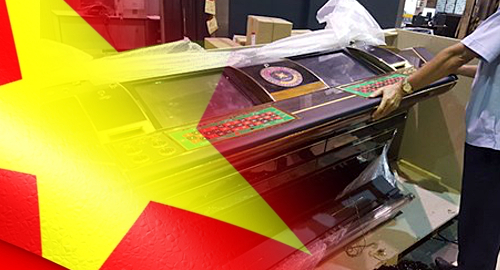 Vietnamese authorities have arrested 10 individuals after breaking up a major online gambling ring.

On Monday, local media reported that police in Thanh Hoa province had detained 10 individuals connected to an illegal online football betting ring. Based on data from some of the seized computers, the ring is believed to have handled wagers worth VND 1.4t (US $62m) since the start of this year alone.

Police have yet to confirm whether the ring was associated with any well-known international online gambling operators. Vietnam is preparing to introduce its own system for legal betting on international football matches but continues to struggle to combat international gambling sites who cater to the needs of Vietnamese punters.

The operators of the host venues reportedly operate via commissions on wagers from punters who register with the international sites. Punters reported preferring to follow the action online as it allows them to wager on multiple fights simultaneously rather than endure lengthy waits between bouts.

Vietnam has long prohibited its citizens from entering the country’s licensed land-based gaming venues. The Ministry of Finance is preparing to launch a three-year trial in which locals will be allowed to enter two casinos, neither of which has yet been built, although the government has been hinting it may expand this program to include access to other gaming venues.