Luke Schwartz shows Salomon Ponte how to play the bad guy after starring in a PokerNews video suggested that he and his nemesis Doug Polk get it on in Las Vegas in the summer.


Salomon Ponte, check this out.

That is how you play the role of the bad guy in poker.

You will notice that Laura Cornelius is laughing, not cringing, and that’s because, like all great bad guys in poker, Luke Schwartz adds humour into the mix.

The Devilfish had it, Tony G had it, and Luke Schwartz has it.

If you didn’t watch the video, then let me fill you in.

Luke Schwartz, who has shunned the limelight for a long time, appears on the Joey Ingram podcast where he calls Doug Polk’s Upswing Poker a scam, stating that Polk can’t beat the games, is a pigeon at high stakes, and therefore shouldn’t be teaching people how to live the dream.

Polk then reacts in his own inimitable way by creating a short video where he hangs a graph of Schwartz’s PokerStars cash game history on his wall. The five-time Spring Championship of Online Poker (SCOOP) champion has lost $843k playing under the pseudonym ib6121.

The purpose of the video was to defend his Upswing Poker brand, a project that Polk said he was very proud of and works very hard at. Polk said he didn’t mind people making jokes about him or even insulting him, referring to Schwartz as a very funny guy but believes he is out of order for calling his brand a scam when he is a legitimate winner of millions of dollars playing high stakes.

Fast forward to the PokerStars Championships in Monte Carlo and who shows up but Luke Schwartz. Laura Cornelius grabs some time with the Brit to ask him about his beef with Polk. 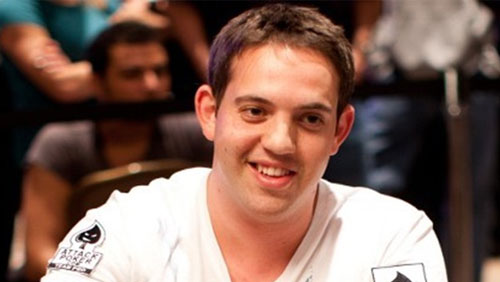 Schwartz called the whole issue minor but did reiterate that Upswing Poker is a scam and that Polk is nothing more than a big pigeon in life who sits in his little bedroom making videos because he can’t beat online anymore.

The former partypoker Premier League icon then wanted to know why Polk doesn’t post his own PokerStars graph on his wall before going on to say because do you know what it looks like? Down $600k because the geezer can’t win online.

When asked about his own bungee like decline on PokerStars, Schwartz told Cornelius that he is a winner everywhere else and that it’s difficult to win online at PokerStars.

Cornelius then asked Schwartz if he had ever met Polk, and he said he hadn’t but If I do meet him and he evens looks at me bad that’s a bad look for him for what’s going to happen, fuck that guy.

We might not see the pair climbing into the ring Olivier Busquet and JC Alvarado style, but we may yet see them getting it on Cate Hall v Mike Dentale style. When questioned by Cornelius as to why the pair doesn’t settle their differences on the felt, Schwartz replied:

Are you listening, Matt Glantz?

Polk has not yet responded to Schwartz’s white-gloved slap across the face.

Perhaps, he is a little busy ironing out the finer details of the $1m Challenge versus Salomon Ponte?