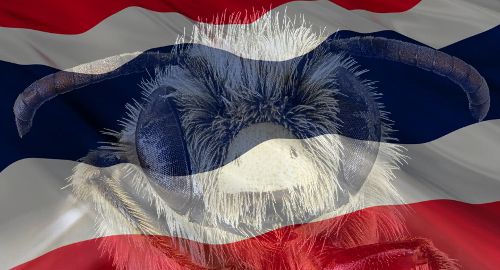 A lottery player in Thailand is recovering in hospital after his quest for lucky numbers was thwarted by a horde of angry insects.

According to a recent report in the Buriram Times, a 54-year-old man is recovering in hospital after being stung by bees over 80 times on Tuesday. The man, identified only as Jai, was attacked by the angry swarm after an ill-advised inspection of a bees’ nest he believed held the key to his winning a lottery jackpot.

Jai’s friend, a man identified only as Samai, told the media outlet that, immediately prior to the attack, he and Jai had discussed an 80-centimeter-long (nearly three feet) bees’ nest that had taken root in the rafters of Jai’s house for over a year. Jai reportedly claimed that he’d done nothing to disturb the nest due to his belief that its presence was ‘auspicious’ and would bring him luck.

Impressed by the bees’ alleged ability to bestow good fortune, Jai’s ‘friend’ Samai suggested they climb up and inspect the nest to see if they could divine some lucky numbers that would allow them to win big in an upcoming lottery draw.

Sadly, before these two Darwin Awards candidates could glean any useful lottery info, the bees took offense and attacked. Samai managed to flee but Jai, who suffers from an unspecified leg injury, couldn’t leg it in time and was repeatedly stung on his face and body.

Jai was ultimately rescued by paramedics and transported to hospital, where he remains in serious condition, while Samai is likely off somewhere convincing another friend that inspecting tiger testicles will reveal the winners of next week’s football matches.

Thailand’s lottery players have some interesting methods of picking winning numbers, likely spurred on by reports of local monks claiming six-figure prizes after meditatively pondering the texture of tree bark.

The majority of Thai citizens want nothing to do with their country’s state-run lottery, mainly due to the lousy odds of winning and the puniness of the jackpots on offer. Which is a probably a good thing, given the potentially crippling strain on the nation’s healthcare system if players continue to look for luck in all the wrong places.