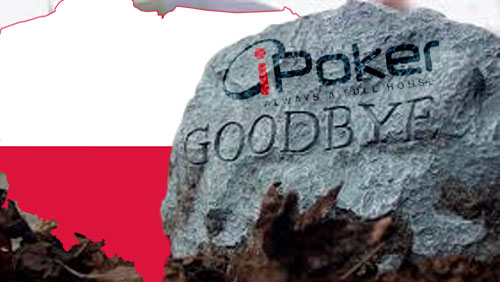 The mass exodus of gambling entities leaving the Polish market increased this week, after a post on the Gambling Portal Webmasters Association (GWPA) confirmed that all skins on the iPoker Network would cease offering a product from 24 April.


If you are a fan of the iPoker Network and reside in Poland, then you are shit out of luck.

According to a thread entitled “William Hill to Exit Polish Market Due to Regulatory Changes” on the Gambling Portal Webmasters Association (GWPA) forum as of the 24 April, all skins operating on the iPoker Network will cease offering a game to Polish based clients.

I was about to write something along the lines of this shouldn’t come as a surprise to anyone, but not everyone writes gambling articles to put green beans on the table for the kids.

IPoker’s biggest hitters William Hill, Bet365, and Betfair all left before the country could introduce the amended Polish Gaming Act on April 1; hammering them with a rather large nail in the shape of a 12% tax on sports betting turnover.

But spare a thought for the punters who were enjoying a bit of gambling action on Titan and Winner. According to the post above on GWPA, the two companies didn’t even contact their players to warn them of the plug pulling, and some were even playing when the closed sign smacked them in the face.

On 24th of April all Ipoker skins withdrawn from Poland. Some big names like Titan (Europartners) or Winner didn’t even send a single email to their customers about this fact. Some players were playing their favourite games and suddenly received pop up about disabled real money activities from their jurisdictions. Is that hard to communicate it to the players at least few days earlier?


Are we going to see a PokerStars Championship, 888Live, or partypoker LIVE MILLIONS event in Poland anytime soon?

Probably not, according to an article that appeared in pl.pokerbreak.net.

The article, written in Polish, was translated into English by the good God Google, so don’t go onto Twitter and call me unqualified and unworthy, please.

The author pulls the amended Polish Gaming Act apart to demonstrate that although the Polish authorities say that playing live poker is legal, if you follow all of the stipulations, then it’s hardly worth bothering.

It’s not an easy read – try it yourself, but from what I can gather the main sarcastic comments are aimed at the following points:

1. Applications for a license to operate a live tournament game need to be sanctioned by the Director of the Chamber of Tax Administration, so organisers had better submit them several decades in advance.

2. The rules that poker tournaments have to abide by have been approved by the Minister Responsible for Public Finance? I would have chosen Dzmitry Urbanovich, to be honest.

3. Whoever organises the poker tournament must ensure that cameras and microphones are recording the entire game.

The one final nail in the coffin is a rule that states the value of the prizes does not exceed 50% of the base amount. Now, I’m not quite sure what that means, but the author of the article figures it out for me?

“This is in my opinion completely kills the purpose of poker, which in its essence is focused just on cash. I cannot imagine a tournament for bicycles and laptops.”

And last but not least.

People who want to bust the deck out and have a game of six-handed action with the grandparents are screwed. The new regulations forbid anyone to play live tournament poker outside of a casino of there is less than ten people in the game.

And you don’t want to be stopped from entering the Pearly Gates with that on your wrap sheet.