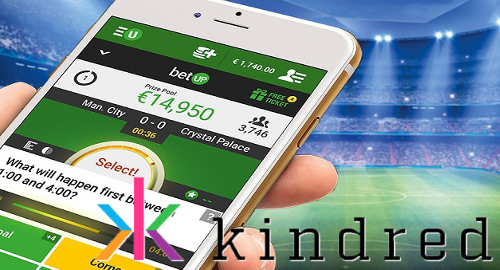 In an interim report released on Wednesday, the Stockholm-listed Kindred reported record revenue of £153.2m in the three months ending March 31, one-quarter higher than the same period last year. But earnings were up only 6.3% to £30.2m and pre-tax profits fell nearly one-fifth to £18.2m.

The profit shortfall was down to significant cost increases, including a 56% rise in betting duties and a 36% rise in marketing spend, as well as some unfavorable foreign currency losses and accelerated amortization of assets.

The sports numbers would have been even higher, given that turnover was up one-third, but margins fell to 6% (after free bets) from 6.4% a year ago. Live betting’s share of turnover dipped nearly four points to just under 60% while its share of betting revenue increased 1.5 points to 53.7%.

Mobile solidified its position as the key driver of Kindred brands, with mobile gross winnings jumping 53% year-on-year, accounting for an impressive 73% of overall revenue in Q1.

Sadly, Kindred declined to provide any insight as to how its new Swedish- and Norwegian-facing VIP-focused online casino brands Storspiller and Storspelare have fared since their launch in January.

Kindred CEO Henrik Tjärnström reported that trading to date in Q2 is highly encouraging, with average daily gross winnings up 24% (17% in constant currency) through April 23.

As for Kindred’s proposed acquisition of online casino operator 32Red, the company says all that’s needed is for the UK Gambling Commission to sign off on the deal. Once that green light shines, Kindred will commence delisting 32Red from the London Stock Exchange and integrating its operations into the Group.

Kindred expects to begin counting 32Red’s contributions to the Group’s bottom line in Q2 while the process of migrating 32Red’s technology onto the Group platform should be done by Q2 2018.