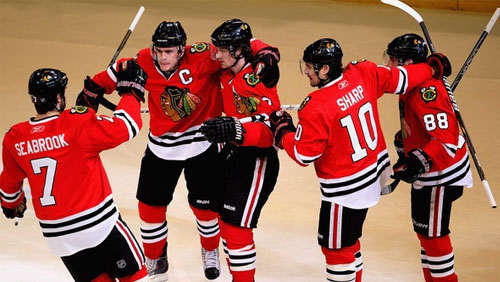 Experience matters in the NHL playoffs, and for that reason alone the Chicago Blackhawks find themselves as slight +400 favorites to take home their fourth Stanley Cup in eight years while the Washington Capitals look to capitalize on their Presidents’ Trophy as the +450 second choice.

While a Stanley Cup Final matchup between the two would be exciting, bettors may find some other teams in the mix that could be worth wagering on this postseason.

The last time Chicago was coming off a first-round exit in the playoffs was 2012, and the team rebounded to win its second Cup in four years the next season. The extra rest of a long offseason has served the Blackhawks well in the past, and having home-ice advantage against any West team by virtue of the best record in the conference certainly helps too.

However, they also tied a franchise mark for most road wins this year with 24, including a team-record eight-game winning streak away from home.

Meanwhile, Washington won one less game this season than last but still easily outdistanced the defending Stanley Cup champion Pittsburgh Penguins to win the Metropolitan Division for the second year in a row. The Capitals lost a tough second-round playoff series against the Penguins last season 4-2 and may have ended up hoisting the Cup had they advanced instead.

Washington made a big move prior to the trade deadline in acquiring defenseman Kevin Shattenkirk from the St. Louis Blues, and he could end up being the final piece to their championship puzzle.

Pittsburgh will be without key defenseman Kris Letang for the rest of the year following back surgery, and his absence will hurt his team’s chances of repeating. The Penguins still finished with the second-highest point total in the NHL with 111, and they are listed as the +800 third choice behind the league’s top goal scorer in Sidney Crosby (44).

Other teams to watch who could be spoilers include the Minnesota Wild (+800), Columbus Blue Jackets (+1000) and Anaheim Ducks (+1400). The Wild were the best team in the West for the first two-thirds of the season, the Blue Jackets could be tough if they can get past Pittsburgh, and the Ducks are physical enough to upset Chicago.

Anaheim edged the Edmonton Oilers (+1600) for the Pacific Division title on the final day of the regular season, and home ice could be the difference if they meet in the next round. The Oilers are led by Art Ross Trophy winner Connor McDavid, and they are making their first postseason appearance since falling in the 2006 Stanley Cup Final.