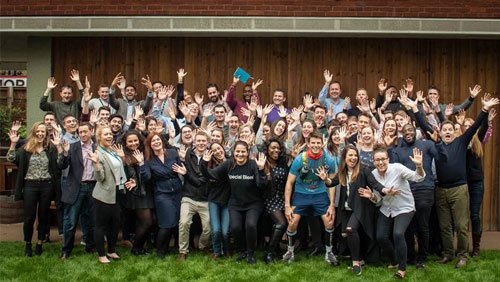 Clarion Gaming’s James King is well known for going the extra distance in his professional capacity but the Sales Director is quite literally going to extraordinary lengths in his quest to raise funds for the charity Mencap. The 29-year old, is competing in the Marathon des Sables, ranked by the Discovery Channel as being the ‘toughest foot race on earth.’ Unfortunately for James the race actually takes place on the sands of the Sahara desert, with a course of 156miles (254 km) run in searing temperatures of 50 degrees centigrade and completed in six days.

Despite having a rigorous 14-month training programme under his belt, James is under no illusions about the size of the task ahead. At a special photo session attended by colleagues at Clarion Gaming, James said: “With just over 1,000 runners taking part, my goal is to finish within the top 250 overall and in the top 50 on the final race day. There’s no doubt that It’s a massive challenge and one that will push me to my very limits, both physically and mentally.”

The pain of completing the 156 miles will no doubt be offset by his marathon fund raising efforts which have seen him raise close to £20,000, most of which has come from friends, clients and colleagues working in the gaming sector. All proceeds from the epic ultramarathon are going to Mencap, the leading charity working with people with a learning disability and their families and carers. “I’ve been truly humbled by the generosity of the industry and by the support of my colleagues at Clarion which has been immense. I set a target of £10,000 and to be close to doubling that sum knowing  how important funding is and what it will mean to Mencap is fantastic.”

To add to the fund visit: https://www.justgiving.com/fundraising/J-KING8