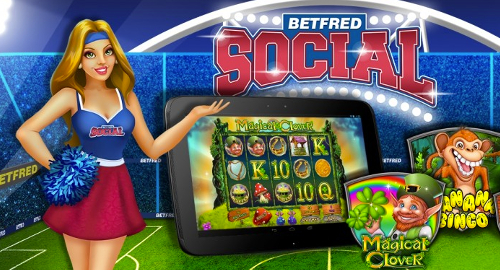 UK bookmakers Betfred have hopped on the social gaming bandwagon via the launch of the new Betfred Social app.

This week saw the arrival of Betfred’s new social casino, which offers free-to-play slots and bingo games, along with the exclusive Betfred Bonus King Blackjack and Magical Clover slot, with more gaming options in the pipeline.

The app, which is available online via Facebook as well as for both iOS and Android mobile and tablet play, is powered by London-based Caleta Gaming, the folks behind the social casino offerings of Brasingo and Novomatic’s Greentube.

This isn’t Betfred’s first foray into the social gaming realm, having launched its We R Interactive-powered I AM PLAYR football video game – which allowed punters to assume the on- and off-pitch role of a professional football player – on Facebook way back in 2012.

TEN ISN’T A CASINO, BUT IT PLAYS ONE ONLINE
Shifting stateside, Atlantic City’s not-yet-a-casino TEN (the former Revel) has launched Play.TenACNJ.com, a social casino powered by GAN (the former GameAccount Network). TEN is owned by Glenn Straub, who has been unsuccessfully trying to reopen the shuttered property’s land-based gaming floor since he purchased Revel two years ago.

As a number of other AC casinos currently offer real-money online gambling, and GAN also powers the real-money online casino of Betfair Interactive US in New Jersey, TEN’s social casino has sparked speculation as to whether this is just a precursor to the property launching a real-money online gambling site. That is, assuming Straub doesn’t make good on his threats to abandon Atlantic City if regulators don’t allow him to skirt the rules that apply to everyone else.

Our last stop on the social casino train takes up to upstate New York, where the Oneida Indian Nation’s Turning Stone Resort Casino has launched its Play.turningstone.com site, along with apps for both iOS and Android. The product, which offers slots, table games, keno and video poker, is also powered by GAN, which signed the Oneidas as a Simulated Gaming client last fall.