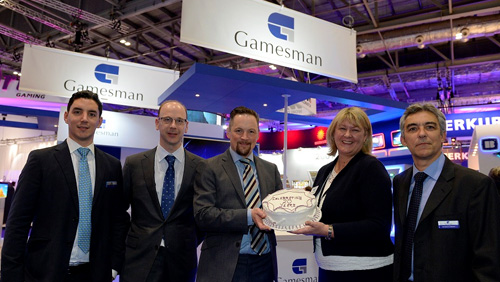 Gamesman was recognised for ‘two decades of innovation’ at February’s ICE Totally Gaming exhibition.  Senior executives from the Esterline Corporation owned gaming equipment components and systems manufacturer, received a celebratory ICE cake from Kate Chambers, Managing Director of Clarion’s gaming division in a presentation which took place on the third day of the record breaking exhibition.

Reflecting on the three days of business and networking, Gamesman Sales Director, Martin Rigby, said: ‘It was a great honour to be recognised for the hard work and commitment invested by the team over the last 20-years.  ICE is our home show and to a large extent it has been part of our journey from a small and enterprising company focussed almost exclusively on the UK street market to our current status as part of Esterline and with a wholly owned factory in China and an office in Las Vegas.  The contacts, contracts and insight we have gained at ICE over the years has made a significant contribution to our present position in the market.”

He added: “ICE has always delivered and this year’s show was no exception.  There were more people, more countries and more quality than ever before and that’s coming after what was a really good ICE 2016.  ICE sets the tempo for the rest of the year and I’m delighted that Gamesman has got off to such a positive and progressive start to 2017.”