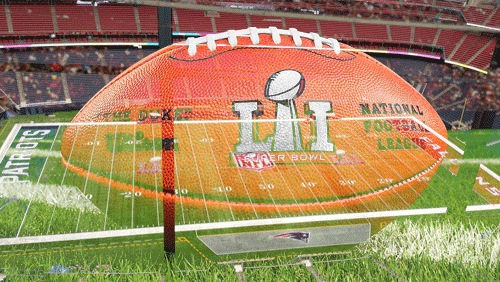 These are real Super Bowl LI prop bets by real gamblers. The percentage reflects where the weight of the money on that specific proposition is leaning. We start with some typical renditions of these bets, and then it gets weird.

And honestly, it’s supposed to be dumb. No other game in the entirety of sports betting receives a more inflated market of prop bets than the Super Bowl. It started with stuff like the coin toss and the color of the Gatorade shower, but it’s evolved in to so much more.

So where are people spending their money? Should you follow the herd? Or are you brave enough to blaze your own trail and…uh…follow a smaller herd?!

I’ll get to this one very soon in a longer breakdown, but it’s worth pointing out that the Patriots have long held the backing of the general public since this line was introduced nearly two weeks ago. It’s a huge toss up as far as I’m concerned. I’m still ironing out some details.

More on this later…

To put this plainly, this is the highest game total we’ve ever seen in the Super Bowl. The previous high was 57.0 back in Super Bowl XLIV between Indianapolis and New Orleans. Comically it’s also 15.5 points higher than the total slapped on last year’s championship game.

There’s a problem with this though. Whenever the Super Bowl total has been 50+ points, the game has only breached that ceiling 3-of-6 times. Even worse, that record drops to just 1-4 O/U if you just count the last five iterations of this game.

I’m not trying to put a dent in your joy for what’s going to be a Super Bowl full of wild punches and haymakers, but these types of matchups almost always tend to let us down. To put this TOTAL in to perspective, the teams will have to score more than 8 touchdowns to even think of hitting this hilariously high number.

I love chasing totals, and the good news is that there are other high marks that you can go after in the Super Bowl LI prop bets market. This, however, might be one you shy away from. Historically, it’s not a great play.

This one’s relatively straight forward given that mostly two-thirds of the public is backing the Patriots. That’s not only because he’s Tom Freaking Brady, but also because seven of the last ten recipients have been quarterbacks. As far as safe Super Bowl LI prop bets go, it’s the safest of all propositions.

All other players have less than 2% of the handle, but there is an argument to be made for a secondary player that comes up with a lot of turnovers. The most obvious candidate there would be Malcolm Butler of the Patriots, but he’ll have his hands full covering Julio Jones. For those interested, Jones is garnering 8% of the current handle.

The only other players to win the Super Bowl MVP in the last decade have been linebackers (Von Miller, Malcolm Smith) and wide-receiver Santonio Holmes.

This Super Bowl LI prop bet total feels like a layup, and that’s why there’s a huge influx of action behind the side of the OVER. Brady has hit 316+ yards in 5-of-14 games this entire season including playoffs. He also managed exactly 315 yards against Buffalo in Week 14.

The playoffs, and this particular Super Bowl for Brady, have been a different matter. Brady scolded the Steelers for 384 yards in what seemed like the easiest game of his life. He also went for 287 yards in a 34-16 blowout of the Texans, and probably could’ve thrown for 400 had he needed to.

My personal inclination with any TOTAL is to chase the OVER in I’m going to be play it, simply because it’s more fun. And if you like witnessing the greatest of all time do what he does best, then this is the Super Bowl LI prop bet for you.

Yes, this is a prop bet about Mohamed Sanu. Not Julio Jones. Not the guy who caught 83 passes for 1,409 yards this year. Not the guy who torched Green Bay for 180 yards and 2 touchdowns. Nope. Instead, the public is going crazy over Mohamen Sanu. What a time to be alive.

Just so you’re well informed before lumping money like the other 90% of people who bet on this prop, Mohamed Sanu has caught for over 45.5 yards in 41% of his games this season. That’s 7-of-17. He’s not good.

But this is where I have to remind you – and myself – that Super Bowl LI prop bets are supposed to be fun. It’s not like you’re only going to play two or three of these crazy awesome propositions, right? And just as you’re knee deep in your fifth bucket of Budweiser, you’re going to see Mohamed Sanu catch a pass and then remember that you bet money on him to reach over 45.5 yards. And you will become his biggest fan.

This is how gambling works. It’s part of the fun.

Long bombs. Breaks. Scampers. Whatever you want to call “big plays”, it’s one of the reasons we love to watch football. There are too many guys who can absolutely kill a game singlehandedly. Freeman and Lewis are both absolutely lightning bolts in the open field. Julio Jones is a ridiculous talent. Whomever returns kicks always has a chance to take advantage of a mental error and take it the distance. So go for it. You’d rather be cheering maniacally

I sincerely stopped caring about this prop bet years ago. I’m sure Luke Bryan is going to do a nice version of it. And all things considered, timing the national anthem in a political climate like this seems sort of crass. Speaking of which…

HOW MANY TIMES WILL “TRUMP” BE SAID DURING SUPER BOWL LI

If they mention Donald Trump, it’ll be a disaster. I’m telling you right now…a flat out disaster. Sad!

“HOW MANY TIMES WILL “GRONK” OR “GRONKOWSKI” BE SAID

There’s no way they don’t say Party Animal’s name at least three times. They’ll show him in the stands and say, “Look there’s Rob Gronkowski”. Michael Bennett will catch a pass and they’ll remind us that Gronkowski also catches passes. They’ll mention him in the long list of players absent from the New England Patriots. And probably five more times after that, especially if the Patriots can’t get any momentum going.

Yes it’s a dumb Super Bowl LI prop bet, but that’s the whole idea. And most of the money is going directly in to these specific wagers. So what are you waiting for? Time to roll up your sleeves and do what you were born to do – spend your money on dumb shit.