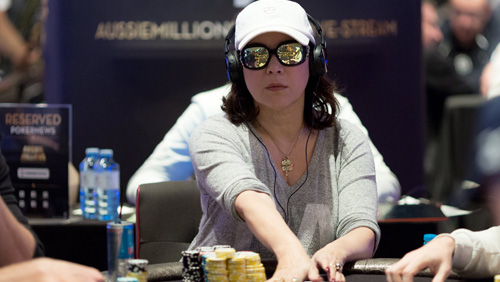 Melbourne, Australia. Thursday 26 January 2017 – The 2017 Aussie Millions will once again reward AUD$1.6 million to the winner, and none other than US actress and Crown’s special guest Jennifer Tilly currently leads the remaining 151 players. The poker enthusiast and Oscar-nominated actress, is followed by big stacks Stephen Bantick, Haoran Zhang, Marc Macdonnell and David Yan.

As play got going with initially 372 players still in contention, some new players signed up to contribute to the prize pool and

One of the new players was Fedor Holz, and in true Holz fashion, he was up to 140,000 after just an hour of play. He didn’t hold on to that mojo all day as he dropped down considerably halfway through, but he found a lucky double with a limp-shoved deuce-eight suited for 28 big blinds to double. He ended the day with a very healthy stack.

Jennifer Tilly soared to the top winning a huge pot where she called a bluffing neighbor with top set. She can boost her total live tournament earnings over that magical $1,000,000 mark if she finishes 24th or better.

While Tilly soared, defending champion Ari Engel headed the other direction. He bled away some chips until he got to the point and he went with it having found pocket fours. Unfortunately for the 2016 Aussie Millions champion, his opponent had pocket aces.

Day 3 will be more of the same, but there’s a chance tensions will rise as it’s bubble day. With 151 players remaining and 80 in the money, the stage where Crown Melbourne will be handing out AUD$15,000-plus checks will be set.

Action gets back underway at 12:30 p.m. local time. Jason Somerville will start live streaming the event.