Melbourne, Australia. Tuesday 17 January 2017. After an exciting weekend of play in Melbourne, the 2017 Aussie Millions is heating up with Austrian Thomas Muhlocker taking down the third event of the series for AUD$40,125. Event #3 featured an AUD$1,150 buy-in and a fun, fast-paced shootout format that instituted a shot clock to keep the game moving. 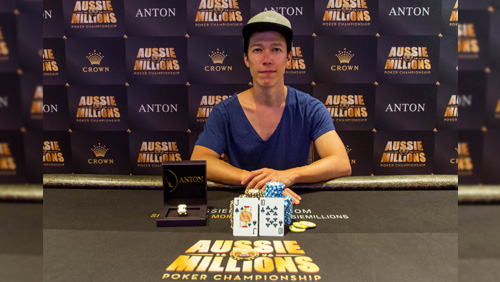 The event began with 153 runners and 17 shootout tables, up from the 126 players who played the same event in 2016. Play began on Sunday 15 January at the Crown Entertainment Complex in Melbourne, with each of the winners of the 17 shootout tables earning a minimum of AUD$2,075.

When the dust settled it was Muhlocker who earned the victory, leaving Szmelcer, a Crown Poker regular with AUD$26,775 for his runner-up finish.