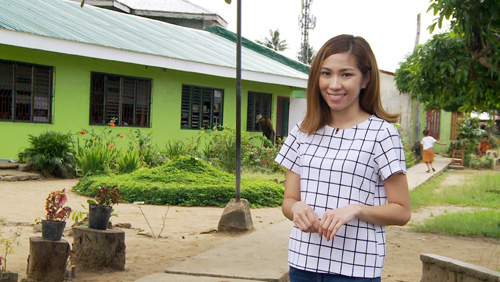 The Calvin Ayre Foundation played Santa to thousands of students and teachers in a public school in the Philippines after it initiated and completed $8000 worth of renovation of typhoon-damaged classrooms before the Holidays.

Last week, the Calvin Ayre Foundation representatives graced the turn over ceremony attended by the students and their parents, community members and teachers at the Mondragon I Central School to officially present the completion of the rehabilitation of the damaged classrooms to Principal Brenda Villadolid.

The foundation was among the first to respond and the only non-government organization who has extended help to the Mondragon I Central School’s plea for help and rehabilitation.

The school buildings’ roofs and its structure were replaced and renovated through the foundation’s initiatives. This project has relieved students and teachers after years of experiencing having classes in classroomswith dilapidated roofs under extreme weather conditions, which is not conducive for learning and have put some of the students and teachers health at risk.

Located in the town of Mondragon in Northern Samar at the center of the Philippine Islands, the school played host to major typhoons in the country for years. The recent major typhoon Ruby in 2014 and Nona in 2015 have destroyed five classrooms and damaged 15 more.

Early this year, the foundation visited the town of Mondragon, where the school is located, to distribute basic necessities to thousands of residents and helped more than a hundred families rebuild their homes damaged by the recent typhoons.

For over ten years, the Calvin Ayre Foundation has been working with local communities and organizations in over eight countries empowering children and the youth through education.

To learn more about this project and other projects of the Calvin Ayre Foundation, and to provide assistance to the Mondragon I Central School in the Philippines, visit calvinayrefoundation.org.